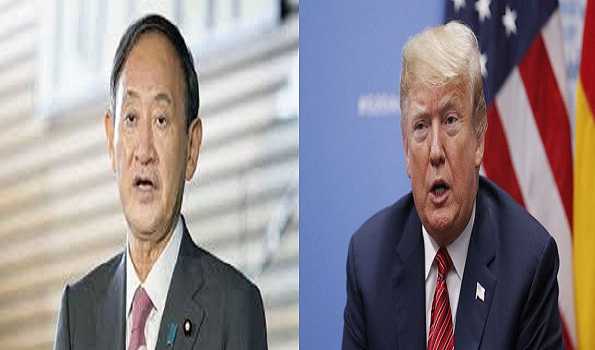 Tokyo, Sep 21(UNI) Japanese Prime Minister Yoshihide Suga and US President Donald Trump have agreed on the need to deepen the Japan-US security alliance and to collaborate in order to tackle the coronavirus pandemic. The two leaders spoke on the phone on Sunday night. This was their first conversation since Suga took office last Wednesday.

Suga after his conversation with the American president addressed reporters where he described the Japan-US alliance as the “cornerstone of peace and stability in the region.”

Suga said that Trump was eager to maintain regular contact with him and said that Suga is welcome to call him “24 hours a day.”

In the conversation which lasted about 25-minutes also the two leaders also exchanged their views on the situation surrounding North Korea and the response to the COVID-19 pandemic.

According to the White House, the leaders discussed the importance of pursuing their shared vision of a free and open Indo-Pacific and agreed to work together to strengthen the global economy.

Earlier in the day, the Japanese Prime Minister also had a phone conversation with Australian counterpart Scott Morrison, the first head of government he spoke to since his inauguration.

Suga told reporters that he was eager to hold more such phone calls with other world leaders, though he did not name anyone.

A report by Kyodo news agency pointed out that among the various diplomatic challenges Suga faces is Trump’s claim that Japan is not contributing enough to the alliance, under which US troops are obligated to protect the country from armed attack.

Maharashtra failed to use Central allocation to combat Covid-19