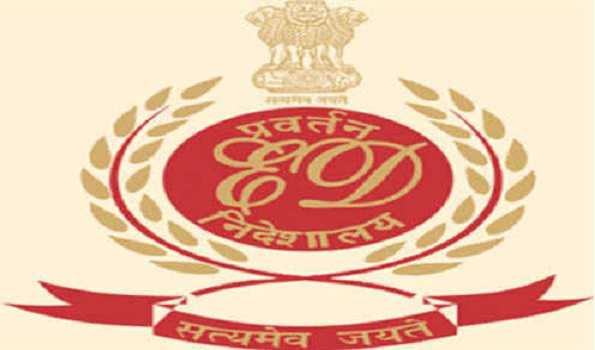 New Delhi, Sep 23 (UNI) Enforcement Directorate (ED) on Wednesday said that it has provisionally attached ‘proceeds of crime’ totalling Rs 11.85 crore in the form of movable properties belonging to main promoters in the case of Surya Vinayak Industries Ltd having registered office in Delhi, and its group companies under the Prevention of Money Laundering Act (PMLA) in a bank fraud case.

The federal financial probe agency initiated investigation under PMLA on the basis of FIR and charge sheet filed by CBI under section 420 and 120 of IPC along with Section 13 of PC Act, 1988 for fraud, cheating and causing wrongful loss to public sector banks to the tune of Rs 2066 crore out of availed loan of Rs 2240 crore against Sanjay Jain, Rajiv Jain, the Surya Vinayak Industries Ltd and others.

“The accused persons Sanjay Jain and Rajiv Jain had fraudulently availed loans to the tune of Rs 2240 crore from various banks on the basis of forged records, forged books of accounts, issuance of bogus purchase invoices, accommodation entries” the probe agency said.

The accused had diverted the loan amounts through bank accounts of various companies and entities controlled by them and also to their personal accounts and acquired movable assets by rotating the bank loans in a maze of transactions to conceal the source, they added.

So far, five provisional property attachment orders have been issued for attachment of properties totalling around Rs 179 crore and a Prosecution Complaint which is equivalent of charge sheet was filed on October 17, 2017 under section 45 of PMLA against Surya Vinayak Industries Limited, Sanjay Jain, Rajiv Jain, SVIL Mines Ltd, Katni and the supplementary prosecution complaint has also been filed on July 18, 2018 against 32 accused.