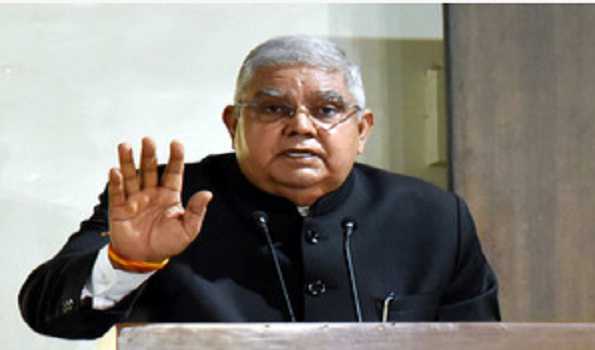 Banerjee’s Trinamool Congress, at the forefront of the agitation against the new bills passed in Parliament on Sunday, said, ‘We will fight your fascism from the pavement to Parliament.’

Meanwhile, Mr Dhankhar in a two-page letter to Ms Banerjee, accused her government of “depriving” 70 lakh farmers of Rs 8,400 crore benefit by failing to participate in the PM-Kisan Samman Nidhi.

The governor described this as “palpable injustice to farmers (which) smacked of poor politics and bad economics”. Taking to Twitter, he further said, ‘Why deny @MamataOfficial benefit Rs 8,400 crores to 70 lac WB farmers. by failure to participation in PM-Kisan Samman Nidhi ! ‘So far every farmer has lost Rs. 12,000/- that would have come to his bank account,’ he said and added, ‘Urge CM -Crocodile Tears will not relieve pain of farmers.

‘Farmers in the Country, except WB have enormously benefited from PM-Kisan scheme and so far more than Rs. 92,000 crores have been defrayed to them,’ Mr Dhankhar averred. ‘This palpable injustice to WB farmers is poor politics and bad economics @MamataOfficial,’ the governor added.

Stating that due to “inaction” of the Mamata Banerjee Government, the farmers of the state had been denied benefit of Rs 30,000 crore out of Rs. 3.5 lakh crore package by the Central Government during the COVID-19 pandemic, Mr Dhankhar expected the chief minister will reflect and take steps to help West Bengal farmers avail benefit of the ongoing PM-KISAN.

Ms Banerjee, who lashed out at the Narendra Modi led dispensation for bringing in the Farm Bills, said it would sound the death knell for the farmers. Coming down heavily on the Union Government the Farm Bills, her party on Tuesday said, ‘We will fight your fascism from the pavement to Parliament.’

The party in its twitter handle stated, ‘Farmers are the pillars of our agrarian nation. @BJP4India’s unconstitutional attack on the grassroots of our society is proof of their pseudo-nationalism. ‘We will fight your fascism from the pavement to the parliament,’ the TMC asserted.

The chief minister yesterday said the bills spelt “farm disaster” for the country and amounted to “killing of democracy in Parliament”. Banerjee went on to say that she was ready to remain in the back row to help the opposition script the struggle. Incidentally, two of her colleagues in parliament–Derek O’Brien and Dola Sen–were among eight Rajya Sabha members suspended for a week for “unruly” conduct yesterday.

Ms Banerjee has urged the opposition parties to unitedly fight the Farm Bills.