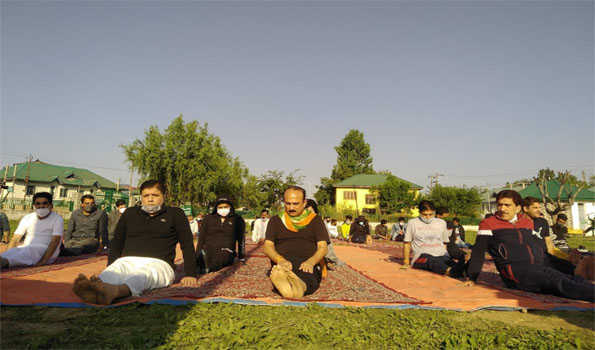 Srinagar, Jun 21 : Reiterating that Bharatiya Janata Party (BJP) is committed to spreading the message of Prime Minister Narendra Modi from Kashmir to Kanyakumari about Yoga, the state unit of the party said that Yoga can help to combat the prevailing COVID-19 crisis.

A spokesman of the BJP said this evening that J&K BJP co-incharge Ashish Sood inaugurated Yoga Day in Srinagar today. Large number of BJP leaders and workers participated in the Yoga event.

“Today we are celebrating the 7th International Day of Yoga in Srinagar while our workers and party cadre also celebrat the day in far-flung areas of the Valley,” he said.

Sood said performing Yoga can be a game changer in combating the prevailing covid19 crisis as it also comes under the respiratory diseases. Yoga is very beneficial, he added.

“Like other PM’s schemes, including drinking water and building toilets, which have reached to ground level, similarly Yoga was being conducted in each and every village of the country,” he said.

Sood described yoga as an invaluable gift which keeps both the body and mind healthy, and asked people to make it a part of their daily life.

Party’s General Secretary, Sunil Sharma said that Yoga has no boundaries and can be performed by anyone.