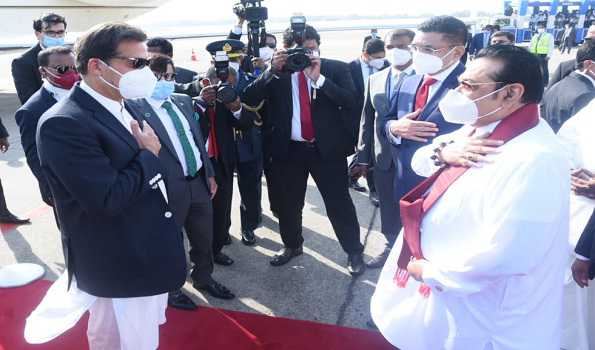 Accompanied by a high-level delegation, including members of the Cabinet and senior officials, will hold talks with Sri Lankan President Gotabaya Rajapaksa and his brother and Prime Minister Rajapakse.

They will exchange views on key regional and international issues and also discuss how to further enhance bilateral cooperation in various sectors, the Dawn reported.

Earlier, the Pakistan Foreign Office (FO) had said that the reconstitution of the Sri Lanka-Pakistan Parliame­n­tary Friendship Associa­tion will also be announced to further promote parliamentary exchanges bet­ween the two countries.

However, it did not mention Mr Khan’s speech to the Sri Lankan Parliament, which was cancelled by the Sri Lankan government, citingCOVID-19 pandemic as the official reason for the cancellation.

However, diplomatic sources and Sri Lankan media have said that it was done out of concerns that Mr Imran could speak about the situation in Pakistan-occupied Kashmir, which could further damage Colombo’s already troubled relations with New Delhi.

Scalable code without bloat: DCI, Use Cases, and You