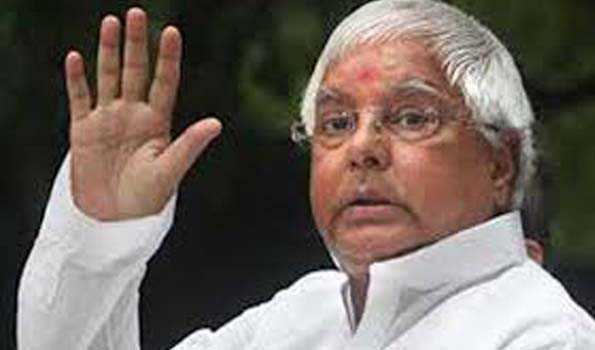 Ranchi, Nov 26 (UNI) Jailed RJD supremo Lalu Prasad Yadav was on Thursday shifted back to the paying ward of Rajendra Institute of Medical Sciences (RIMS) here from the Kelly Bungalow.

In the paying ward, he has been kept in room number 11. Lalu Yadav had stayed in the Kelly Bungalow which is the residence of RIMS Director for a total of 114 days. With the rising cases of Coronavirus in the state, Lalu Yadav had been shifted to the Bungalow on August 5.

On Tuesday audio went viral in which Lalu Prasad Yadav had allegedly asked an MLA of the Bihar BJP to abstain from the house as the incident got blown out the jail administration decided to shift him back to the paying ward.

On the issue of calling BJP MLA Lalan Paswan DC Chhavi Ranjan has sought a report from the jail superintendent however before the report could be submitted he has been shifted back to the paying ward.

The DC has sought answers from the jail superintendent as to whether the jail manual had been violated in case of Lalu Yadav and how mobile phone reached in the hands of the RJD leader.

On Wednesday itself Jail IG Virendra Bhushan had ordered for a probe and had asked the Ranchi DC and SSP to conduct a probe. The jail IG had also asked the jawans deployed in security of Mr Lalu Yadav to remain alert and make sure that no one is able to meet him without permission.

On Thursday itself a team led by RIMS superintendent had visited the paying ward and had inquired into the arrangements. Newly appointed RIMS Director Dr Kameshwar Prasad had been staying in the state guest house located at Morhabadi since the Bungalow was occupied by Mr Yadav.

Lalu Yadav is undergoing treatment in RIMS for more than two years. He was first admitted in cardiology ward of RIMS on August 29, 2018, after which he was shifted to paying ward in the paying ward on September 5.

With cases of Coronavirus rising in the state on August 5, 2020, Lalu Yadav was shifted from the paying ward to Kelly Bungalow.

Bihar elections to be held in 3 phases; counting on Nov...