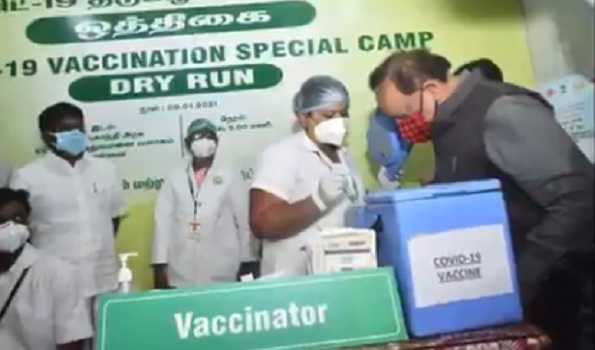 Ahead of the roll out of the vaccine to for coronavirus, dry run for administering the vaccine was held across all the districts in Tamil Nadu, with Union Health Minister Harsh Vardhan inspecting the state’s preparedness and the cold storage facilities.
The mock drill was being held as part of the nation-wide dry run being held 736 districts across 33 States/UTs in the country.
Dr Harsh Vardhan, who landed in the city last night, inspected the vaccine administration facilities at Rajiv Gandhi Government General Hospital along with Health Minister Dr C Vijayabaskar and Health Secretary Dr J Radhakrishnan. Later, he inspected the state’s preparedness on adminsitration of vaccine at Government Multi-Super Speciality Hospital at Omandurar Government Estate, visited the private vaccination centre in Apollo Hospital and the General Medical Store Depot (GMSD) in Periamedu, which is one of the four national vaccine storage facilities, the other three being Mumbai, Kolkata and
Karnal. Dr Vardhan also met Chief Minister Edappadi K Palaniswami and
held discussions on the preparations for vaccination. Later, Dr Vardhan also visited the vaccination Centre at Chengalpattu. He also visited the Hindustan Bio-Tech Ltd Campus at Chengalpattu, after concluding his supervision at these sites. After the success of the dry run at 17 centres in five districts on January two, a full-fledged mock drill was conducted in all the 38 districts of the State today. The dry run of vaccination was conducted in five places, including primary health centres, urban health centres, and government and private hospitals, in all the districts of the State. The dry run conducted by the health department was to check the design of the waiting room, vaccination room and observation room, the entry points, availability of space and time taken to cover 100 persons a day.