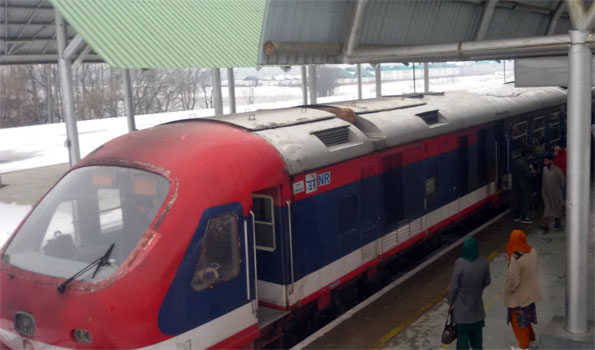 Srinagar, Feb 22 (UNI) The train service between Baramulla in north Kashmir and Banihal in Jammu region resumed partially on Monday after remaining suspended for over 11 months due to COVID-19 pandemic.

A Railway official told UNI that the train service on 137-kilometre Banihal-Baramulla route, comprising of 17 stations, was partially restored on Monday with only two train runs in a day. “The first train will depart from Baramulla at 0910 hrs while the second train will leave Banihal at 1125 hrs,” he said.
He said people have been asked to avoid unnecessary travel and maintain social distancing inside the trains. “The service was partially restored on Monday after conducting a dry run on Sunday,” .

Meanwhile, good number of people could be seen commuting on the first train, which left Baramulla at 0910 and has reached Banihal. “We are really happy that the train service has been restored partially between Baramull and Banihal. It is not only economical, but also saves commuters a lot of time,” Imtiyaz Ahmad Sheikh, a resident of Baramulla, told UNI.

Sheikh said that the service should be completely restored so that more people can benefit from it. Similar views were expressed by other commuters, who boarded the first train from Baramulla and other stations.

The Chief Area Manager of the Northern Railway for Kashmir had last week asked the authorities concerned in Srinagar and Budgam to inform him whether they have any objection in restarting passenger train on Baramulla-Banihal route.

The railway authorities had ordered suspension of train services between Banihal and Baramulla in the Kashmir division with immediate effect in March last year in view of outbreak of COVID-19 pandemic in the Union Territory. The service was initially suspended till March 31. But, the duration of suspension was extended several times due to no let up in COVID-19 cases.

Since March 2020, only a special train run of Kashmir’s first Luxury Glass-roofed AC train was held in September last year between Baramulla and Banihal for a documentary that was filmed on the 137-km-long rail link, which before the restrictions used to ferry over 30,000 commuters every day.

In order to make train journey in Kashmir valley comfortable and exciting, the Northern Railways in 2018 introduced the first Air-Conditioned train fitted with a glass-rooftop and bigger windowpanes for sightseeing.

However, the full-fledged operation of the special coach was not possible, first due to the lockdown then due to unrest post abrogation of special status of J&K on August 5 last year and later due to COVID-19 pandemic.

The train service has become very popular as it is being considered safe, fast and cheap against other mode of transport. However, Railways in Kashmir has incurred huge losses due to suspension of services due to COVID-19 pandemic in 2020 and security reasons in 2019 following unrest post abrogation of special status of J&K and before that.

Israeli delegation meets Yogi to discuss investments and cooperation in UP