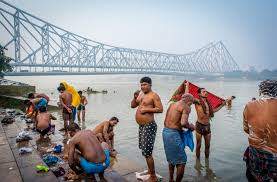 Kolkata, Sep 19 (UNI) The COVID-19 toll in Bengal rose to 4,242 with the death of 59 persons on Friday, while the tally touched 2,18,772 with 3,192 new confirmed cases.
According to the latest State Government Health bulletin, the active cases accounted for 24,509, while the number of discharged stood at 1,90,021.
The percentage of discharged rose to 86.86 per cent.
The bulletin said the total number of samples tested stood at 26,99,299 with 45,229 tested till yesterday.
While the city recorded the highest number of 1551 deaths so far, surrounding districts of North 24 Parganas and Howrah came second and third respectively with 950 and 489 fatalities.

South 24 Parganas accounted for 269 deaths, the toll in Hooghly stood at 184, Darjeeling 94, Paschim and Purba Midnapore 89 and 101 respectively, Malda 51, Murshidabad 59, Nadia 71, Paschim Bardhaman 50, Purba Bardhaman 39, Jalpaiguri 43, Uttar Dinajpur 28, Dakshin Dinajpur 30, Birbhum 23, Alipurduar 35, Kalimpong 3, Cooch Behar 28, Purulia 14, Jhargram 2 and Bankura 36.
Meanwhile, zoos across West Bengal, including the Alipur Zoo in the city, will reopen on October 2, coinciding with the birth anniversary of Mahatma Gandhi, according to State Forest Minister Rajib Banerjee.
Forests usually close down for two months every monsoon – from July 15 to September 15, but this year, forest areas have remained closed for far longer than that in order to contain the Covid-19 pandemic.
Ahead of Durga Puja, this is good news for tourists as well as for those who run establishments around the forest areas.
Prolonged closure of hotels in tourist destinations has led to huge losses for businesses.
Banerjee said besides the zoos, the national parks and travelling into the safaris and tourism centers across the state would be operational from September 23 onwards with maintenance of Covid protocol.
He, however, said the elephant ride in the safari would not be allowed for now and the tickets would be booked only online.
All the zoos, national parks, eco tourism centers have been shut from March 17 last due to Coronavirus pandemic.

COVID-19 must be a “pivotal moment for change” for animals

SARS-CoV-2 can survive for 28 days on surfaces: Aussie scientists