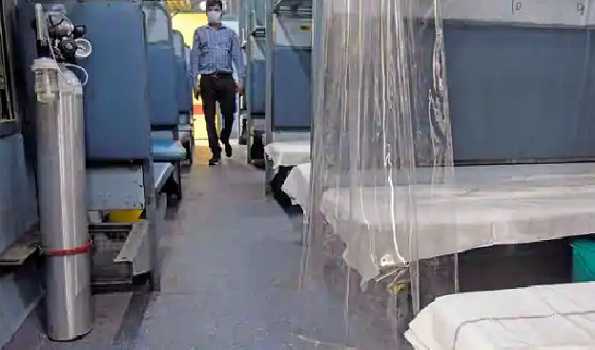 New Delhi, May 8 (UNI) Indian Railway on Saturday informed that it has deployed 298 Isolation coaches at 17 stations in seven states so far to aid the civil administration in Covid management. As of now, the 298 coaches has provided 4700 beds for non critical patients.

It has placed 60 isolation coaches in the State of Maharashtra while Nandurbar while 11 Covid Care Coaches (with one coach serving exclusively for medical personnel and supplies) at Ajni Inland Container Depot and handed over to Nagpur Municipal Corporation. At Palghar, where the Railways recently provided 24 coaches, the facility has been operational.

The Railways has deployed 42 coaches in the State of Madhya Pradesh. The Ratlam Division of Western Railway has deployed 22 Coaches with a capacity of 320 beds at Tihi Station near Indore whereas at Bhopal, where 20 coaches are deployed on the demand of of the local authorities.

In the latest update, with latest demands from the State of Assam, Railway has swiftly moved 21 isolation coaches to Guwahati and 20 Isolation Coaches to Badarpur near Silchar (N. F. Railway). Earlier in the week, Isolation Coaches were deployed at Sabarmati, Chandlodiya and Dimapur respectively.

In Delhi, the Railway has catered to the full demand of State Governments’ demand for 75 Covid Care coaches with a capacity of 1200 beds. 50 coaches are positioned at Shakurbasti and 25 Coaches at Anand Vihar Stations providing 1200 beds.

In Uttar Pradesh, though coaches have not yet been requisitioned by State Governmnent, 10 coaches each are placed at Faizabad, Bhadohi, Varanasi, Bareli & Nazibabad totalling to a capacity of 800 beds (50 coaches).

The Railways has made available a fleet of more than 4400 Isolation Coaches with around 70,000 beds to serve as Isolation Units.