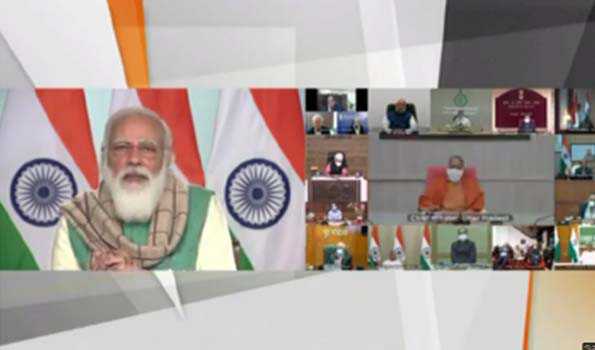 New Delhi, Jan 11 (UNI) Prime Minister Narendra Modi on Monday said that health workers, in government and private sector, and other frontline workers will be vaccinated first against the deadly Covid-19 viral disease and the cost of the vaccination for these three crore workers will be borne by the Central Government.

As India prepares to launch the world’s largest vaccination drive from January 16, the Prime Minister held a meeting with all state Chief Ministers to review the roll-out plan. He also indicated that the leaders should not “jump the queue.’ “In the second phase, those above 50 years, those under 50 years with co-morbid conditions will be vaccinated first and the government has made necessary preparations for patients, if the COVID vaccine shows any side-effects”, Mr Modi said, adding that experts have taken all precautions to provide the countrymen with effective vaccines.Describing that discussion and cooperation between states and Centre has helped a lot in the fight against the Corona pandemic, he said: “We have presented a good example of federalism”.Noting that that COVID-19 pandemic has not spread in India on the scale as compared to the other countries of the world, Mr Modi said it was a result of working together by standing unitedly during COVID crisis as well as quick decisions which were taken with full sensitivity.

In the meeting, Mr Modi said that two vaccines Covishield and Covaxin, which have been made in India, have been granted approval for emergency use and both the vaccines are cost-effective. He also informed the chief ministers that apart from these two vaccines, four others are in the pipeline.

The Prime Minister urged all States and Union Territories to ensure that rumours around the vaccination programme should not allowed to spread as the corporate competition and vested interests of certain lobbies within and outside the country may be at work to fuel the rumours.

Talking about the prevailing situation of Bird Flu in different parts of the country, he said the Government has formalized a roadmap which needs to be followed up and all District Magistrates will have to play a major role in checking the spread of the disease.

He also added that those states, where no case of Bird Flu has been reported so far, must maintain utmost precaution.