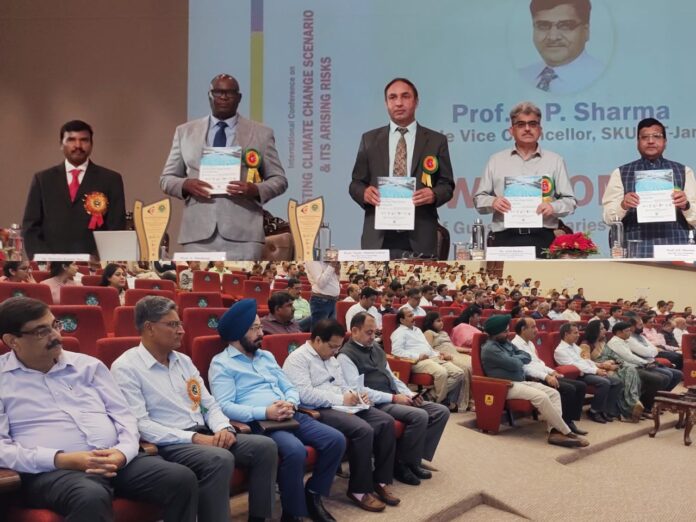 A two days’ International conference on “Existing Climate Change Scenario and its Arising Risks” commenced from today at SKUAST-Jammu. The conference is being organized by Mahima Research Foundation and Social Welfare & Sher-e-Kashmir University of Agricultural Sciences and Technology of Jammu The conference was inaugurated by Sh. Atal Dulloo (IAS), Financial Commissioner (Additional Chief Secretary), Agriculture Production Department Jammu and Kashmir UT who was the Chief Guest on the occasion. In his inaugural address, Sh. Atal Dulloo congratulated SKUAST-Jammu for organizing this mega event timely on the very relevant topic. He said that Agriculture is an integral part of the world’s economy and is the lifeline of underdeveloped and developing countries like India. He strongly advocated that agriculture is the only sector that can help in reducing poverty by raising incomes and food security for 80% of the world’s poor.

But, today the prosperity of agriculture and future of our farmers is threatened by new challenges such as climate change. He further added that the yield of rainfed & irrigated rice in India are projected to reduce by 2.5% & 7%, respectively by 2050. Further, wheat yield is projected to reduce by 6-25% in 2100 and maize yields by 18-23%. Sh Dulloo during his speech said that J&K is also witnessing the brunt of climate change and average mean temperature in last 28 years rise by 2.32°C & 1.45°C in Jammu & Kashmir region, respectively. In 2014, we witnessed a devastating flood situation on Kashmir and almost every year due to untimely rainfall, the crop of paddy in Jammu and apple in Kashmir suffer huge losses. So we should prepare ourselves and our farmers to adapt to these weather changes so that they would not suffer on economic front.

He informed that We have constituted a Apex/High Powered Committee under the Chairmanship of Dr. Mangla Rai, Former DG, ICAR & Secretary DARE for formulating a comprehensive policy for holistic agriculture development in J&K. He appreciated Vice Chancellor(s) of both farm universities for playing outstanding role to draft proposals with the target to enhance incomes of the farmers in UT of J&K. He congratulated and said that SKUAST-Jammu is a technology hub and will remain in future and also said that Under the headship of Vice Chancellor Prof. J.P. Sharma, the University has achieved many milestones. He wished success for the conference. Earlier Additional Chief Secretary inaugurated Training and Testing Lab of Agricultural Engineering, Bioinformatics lab of School of Biotechnology, Smart Class room and Statistical Data Analysis Cell (SDAC) in the Division of Statistics and Computer Science. He also visited bee keeping unit, mushroom unit, technology park, integrated farming system research centre and centre for organic farming and inspected the exhibition of the technologies of SKUAST-Jammu.

Prof. J. P. Sharma, Vice Chancellor, SKUAST-Jammu and Chief Patron of the conference thanked Sh. Atal Dulloo ji for his presence and appreciated for his remarkable efforts during the CoVID period and now in agriculture sector which is rewarded at J&K UT level and national level as well. He said that Govt of J&K has taken many initiatives which is going to change the face of agriculture. Vice Chancellor said that farm universities and all the development departments are now on the similar platform and working for the development of farmers and agriculture in J&K UT. He said that temperature and rainfall are the two main components of climate change and on the basis of which farmers need to take decision about sowing and harvesting of crops. He stressed upon processing, waste management, value addition and marketing of the agriculture produce t

through promotion of FPOs and cooperative societies in the country to empower farmers. He advised organizers to come out with recommendations out of this conference. Prof. Nazir Ahmad Ganai, Vice Chancellor, SKUAST-Kashmir was Guest of Honour on the occasion. He said that global warming resulted from climate change has become issue of serious concern worldwide for existence of life on the earth. He further added that in the present era, agriculture is facing a lot of challenges regarding water scarcity, declining land availability, land fragmentation, wastage of agricultural produce, disinterest of youth towards agriculture and migration of rural people towards urban areas. Prof. A. Mushunje from South Africa also spoke on the occasion. Giving details of the conference, Dr. Brajeshwar Singh, Convener of the international conference informed that there will be eight technical sessions and six poster sessions during two days mega event with more than 300 delegates comprising professionals, researchers, academia, policy makers, extension functionaries, students and representatives of different organizations from India and across the globe have registered for the conference. Dr. Sumati Sharma, former Additional Director, DRDO; Director Agriculture, Director Horticulture, Director Command Area Development, Dea, FoA, SKUAST-Kashmir; statutory officers of the SKUAST-Jammu, various dignitaries of different departments, staff members, students and media personnel were also present on the occasion. Proceedings of the inaugural were conducted by Prof. Ankur Rastogi and Vote of thanks was presented by Dr. Vikas Gupta, Convener.