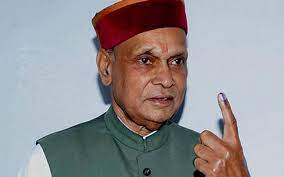 Hamirpur (HP), Jun 5 (UNI) Former Himachal Pradesh chief Minister and veteran BJP leader PK Dhumal expressed shock and grief over the demise of former state horticulture minister Narendra Bragta.
In a message sent to his family, Mr Dhumal said that in the death of Shri Bragta, he had lost one of his closest friends and a ‘masiha’ (Saviour) of the farmers.
He said that Bragta was one of the senior party leaders and had worked for the wellbeing and welfare of the people of the state especially, the farmers and orchardists.
He said that he remained a two-time minister when he( Dhumal) was the chief minister of the state and worked for starting of the Apple markets in upper areas of the state that were functioning efficiently these days.
Dhumal has condoled the death of MLA Bragta and had expressed sympathies with the bereaved family. He said that in his death, the state had lost a great leader and sympathizer of the common people and his loss would be irreparable.
BJP Himachal Pradesh Vidhan Sabha chief whip and MLA from Jubbal-Kotkhai Assembly constituency Narinder Bragta passed away at PGI Chandigarh this morning. He was 69.

Rupee up marginally by 4 paise against USD

Positivity rate of half dozen of district shoot above 30 PC