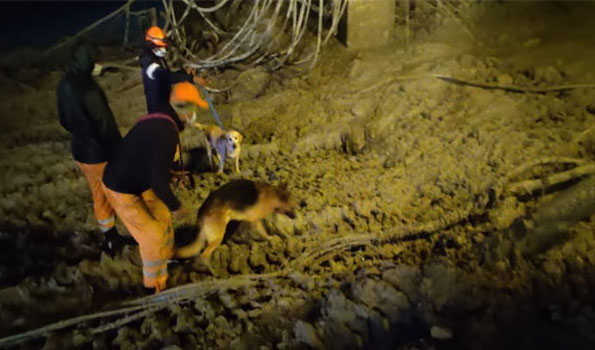 Lakhimpur Kheri, Feb 8 (UNI) While the rescue operation is underway in the Tapovan area of Uttarakhand where massive flash floods hit on Sunday morning, family members of 15 missing labourers, are running out of patience.
These labourers, residents of Lakhimpur Kheri district of Uttar Pradesh were working in the severely-affected power project site.
The missing include 15 youths from village Babu Purva, Bherampur, Manjha and Kadia of Nighasan tehsil area who were working at the power project site in Tapovan. The relatives of the workers have been unable to contact them, however as of now, there has been no information of their whereabouts, officials here on Monday said.

A labourer, who survived the tragedy gave this information to his family members and said that he survived but 15 companions working with him were either swept away or are still trapped in the tunnel. As soon as the information of the missing labourers was reported, they tried to contact them over the phone, but could not talk to anyone.

As per information, five youths of Babupurwa village, named Hiralal, Suraj, Arjun, Vimlesh, Dharmendra and Arun are still missing, and no information about them has been received. Meanwhile, 10 missing youths from Bherampur and Manjha villages are still missing.

Two power projects NTPC’s Tapovan-Vishnugad hydel project and the Rishi Ganga Hydel Project have been extensively damaged with scores of laborers trapped in tunnels as the waters came rushing in. So far, 16 men were rescued safely from a tunnel in the Tapovan project but about 125 were still missing. As night fell in the ecologically fragile Himalayas and rescue work in the difficult to access areas became more difficult, there were fears they may be dead.

Biden to ask Americans to wear masks for the first 100...