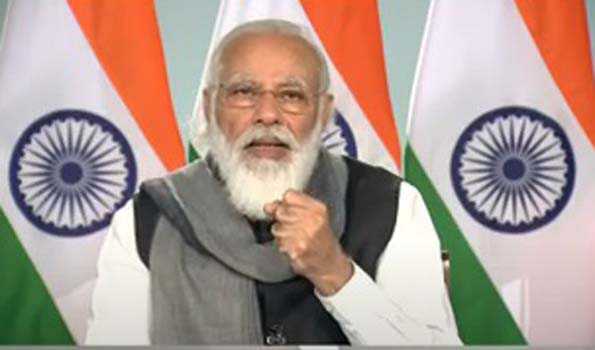 New Delhi, Dec 5 (UNI) Ahead of the fifth round of talks with farmers, the main strategists of the Government Union Ministers Amit Shah, Rajnath Singh, Piyush Goel and Narendra Singh Tomar on Saturday morning met Prime Minister Narendra Modi at his residence at Lok Kalyan Marg.

Though the details of the meeting have not been shared but it is understood that the Ministers must have updated PM Modi on the current situation where the representatives of the farmers’ unions have been demanding total recall of those acts.

The fifth round of talks between representatives of the farmers’ union and the Centre is scheduled for Saturday afternoon at Vigyan Bhawan. The Agriculture and Railway Ministers Narendra Singh Tomar and Piyush Goel have been negotiating with them under guidance of senior Ministers Rajnath Singh and Amit Shah.

The farmers’ agitation has entered on 10th day today and they have been protesting for at various entry points on Delhi borders since last ten days pressing the Government to withdraw the said acts.

The 4th round of talks between the two sides was held on Thursday at Vigyan Bhawan in which the representatives of forty Farmers’ Unions participated in a dialogue with Agriculture Minister Narendra Singh Tomar, Railways Minister Piyush Goel and Minister of State for Commerce Som Prakash.

Senior officials from the Agriculture Ministry and the Ministry of Consumer Affairs, Food and Public Distribution also participated in the dialogue. In last round of the talk, Mr Tomar reiterated the farmers’ representatives that the Minimum Support Price (MSP) will continue and their apprehensions about the MSP is not true.

Grenade attack on police party in Sopore, no damage reported