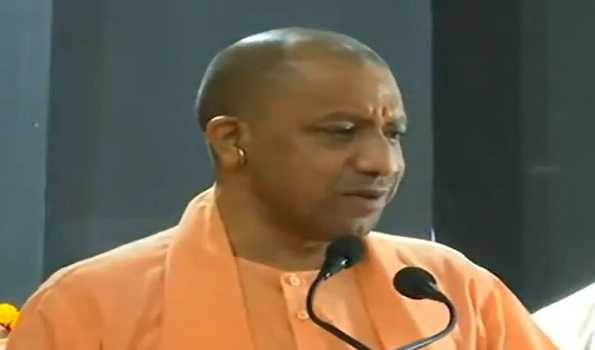 Lucknow ,Oct 23 : Uttar Pradesh Chief Minister Yogi Adityanath on Saturday launched a scathing attack on the Samajwadi Party, Bahujan Samaj Party and Congress, saying, “these people are anti-Lord Ram , embraced rioters and mafias and have teared the social fabric of the country.

” It will better to keep away from them as long as possible, for a bright future,he opined”.Chief Minister Yogi Adityanath while addressing the participants of Vishwakarma Samaj in a series of ‘Samajik Pratinidhi Sammelan’ organised by the BJP Backward Classes Front here on Saturday said, “The one who is anti-Ram can never be your well-wisher, it is your responsibility to take care of yourself.”

” Go and tell the people of the society of the evil attitude of these forces. We have planned and moving ahead to secure the present as well as the future,” he claimed.

Criticising the previous governments, especially the Samajwadi Party, Yogi said, “Earlier governments used to consider their family as number one family of the state and was involved in looting from 2012 to 2017. The government from 2012 to 2017 was the living in Kalyugi incarnation of Mahabharata.”

Yogi said this question arises again and again, as on one side there is BJP which works to save the bridge established byLord Vishwakarma and on the other side there is SP, BSP and Congress which tried to break the bridge since 2005.

The Chief Minister said, “When the Congress-led government was formed at the Centre in 2004, there was a competition between SP and BSP to support the Congress leadership. The SP had given support without asking and their intention was to hurt the Hindu faith by placing a gun on the shoulders of the Congress.”

He said, “The bridge which was built by Nal and Neel and which is still considered as a symbol of Ramayana, Congress, SP and BSP were engaged to break it.”
Yogi said while targeting the opposition. , “These people insult the faith, they are the people who break the social fabric, hinder development and throw the state in the fire of riots.”

Counting the development plans, the Chief Minister said, “Prime Minister Modi’s vision and with the blessings of Lord Vishwakarma, development works are being successfully implemented. Will operate the metro in Kanpur by November.”

He said, “Even today, Lord Vishwakarma is worshiped as the deity of craftsmen throughout the country and in Uttar Pradesh, work has been done to advance the traditional hand craftsmen through Vishwakarma Shram Samman.
He said if Nishad Raj had contributed in getting Lord Ram to cross the Ganges, then Vishwakarma Samaj had done Ram’s work by building a bridge in the sea.

He claimed that today no one will be able to riot in the state, but earlier when festivals used to come, there used to be riots.
” Every Holi festival and , before Janmashtami, there would be riots and curfew was imposed. How can one celebrate festivals in the shadow of curfew and after that these people used to humiliate the people of the state by wearing round caps,” the CM said.
Several senior BJP was present in the gathering .

Products of SHGs to be sold in HP through post offices...