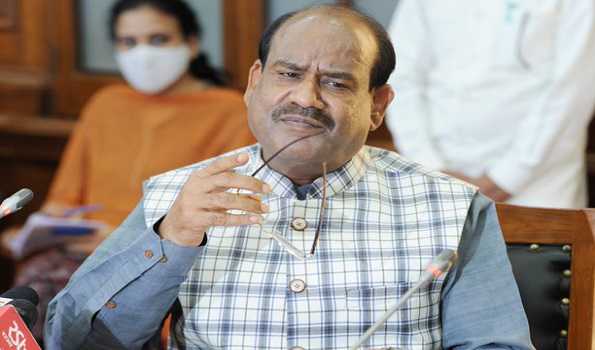 New Delhi, Sep 13 (UNI) Ahead of the Monsoon Session of Parliament, Lok Sabha Speaker Om Birla said on Sunday that Covid-19 testing facility would be available in the Complex during the entire duration of the session and if a member has a health-related complication, immediate help would be extended.

A meeting of the Lok Sabha Business Advisory Committee, chaired by Mr Birla, was held where discussions were held on Business of the House and Bills that are to be taken up in the Session starting tomorrow.

The Speaker visited the Parliament Complex to take stock of health security measures and other preparations.

Mr Birla inspected closely every point from the Building Gates to the Lok Sabha Chamber and directed officials to immediately address minor requirements that were felt necessary.

After this, he visited the Chamber, Corridor, Inner lobby, Outer lobby, Waiting Hall, Media Stand, and other places in the Complex and gave necessary instructions.

After the inspection, Mr Birla said the Monsoon Session of Parliament is being held under adverse times and all health security arrangements had been made for the Session.

It has been ensured that sanitation and other arrangements are in place at all places, following the guidelines of the Government and the suggestions of expert institutions.

Mr Birla hoped that the conduct of the proceedings of the House would be uninterrupted and orderly and all parties would be successful in achieving maximum productivity.

He further said that all MPs and their family members had undergone COVID-19 test before the Session and they have been given kits of sanitizer, mask, gloves and other health related material.

All officers and employees of Parliament were also tested. He informed that the Testing facility would be available in the Complex during the entire duration of the session. If a member has a health-related complication, immediate help would be extended.

Mr Birla informed that has been set up in Parliament House Complex to address COVID-19 related complications and requirements of Members.

Earlier, the Speaker chaired the meeting of the Business Advisory Committee in Parliament House Annexe.

In this context, he told the media that it was emphasised in the meeting that, in such exceptional circumstances, there should be a more meaningful and positive discussion on legislative subjects during the Session, while taking care of health-related protocols.

He said that all parties had assured maximum cooperation and all MPs are committed to fulfilling their constitutional obligations.

During the day, Mr Birla also visited the COVID-19 Testing facility set up in Parliament House Annexe for the Members of Parliament and reviewed the preparations there.