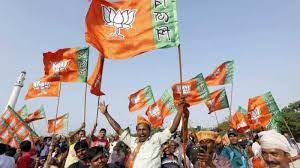 A BJP worker body was today found at his Nandigram residence, even as the overall polling at this
high profile assembly constituency in East Medinipur where the chief
minister and TMC chairperson Mamata Banerjee is pitted
against his former aid turned BJP rival Suvendu Adhikari, overall
peaceful so far.
The latest report said about 16 per cent of voters cast their franchise in
the first two hours at 30 assembly seats where polling is underway
in four districts.
The report said while South 24 Parganas had the lowest 9 per cent voting,
East Medinipur and West Medinipur had 17 pc and Bankura
reported 16 per cent up to 9 am since polling began at 7 am.
Mystery shrouded with the discovery of BJP worker body, identified as
Uday Shankar Dubey, at his East Vekutia residence under Nandigram Block 1 this morning.
He is suspected to have hung himself, a primary investigation report revealed.
However, the discovery of his body in a hanging position created panic
among the family members and in the locality.

All 8 beaches recommended by govt get Int’l Blue Flag Certification:...