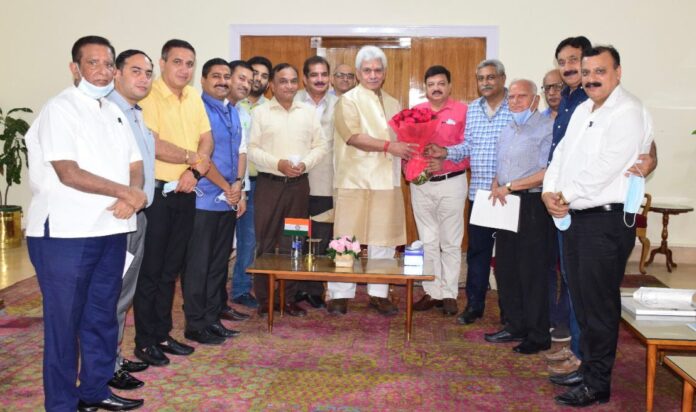 A joint delegation of Chamber of Commerce and Industries, Jammu, and Federation of Industries today called on Lt Governor Manoj Sinha and submitted a charter of demands highlighting the issues and demands of the industrialists and traders of the region.

During the meeting, Arun Gupta, President CCI Jammu appreciated the efforts of Lt Governor for giving his valuable time, bringing J&K on industrial map of the country and making all efforts to bring investment from outside the state for the betterment of the youth of the Union Territory.

Rajesh Jain, President FOI Jammu apprised the Lt Governor that the existing industry is feeling neglect as the same is providing employment to the local youth with very small investment while upcoming industry shall fetch more incentives and provide less employment.

Arun Gupta said the “JPDCL has proposed hike in power tariff to the tune of approximately 70% and fixed charges to the tune of 50%. Such big hike has never been seen in the country by the any utility provider. The proposed power hike shall not only hit the existing industry but also send bad signal to the upcoming investors for which government is putting all its efforts,”.

Arun Gupta also raised the issue of extension of validity of Provisional registration of industrial units.

“The Apex Project Clearance Committee in its meeting held on 8/12/2021 granted extension in the validity of provisional registration upto June 30, 2022 to the units which had not commenced production within the stipulated time. Such industrial units are in the process of commencement of production but due to certain unavoidable circumstances including non-sanctioning of loan, delay in supply of machinery by the supplier , non issuance of certificate from PCB, non-sanctioning of power, etc they are not in a position to commence their production before June 30, 2022,”.

Arun Gupta and Rajesh Jain urged the Lt Governor to take effective steps by extending the validity of provisional registration of the aforesaid industrial units by at least one year.

The Lt Governor gave a patient hearing to the visiting delegation of Chamber of Commerce and Industries, Jammu and assured that he will pass necessary directions to the concerned Principal Secretary for early consideration of the demands. He said that industrial sector is the back bone of the Union Territory and necessary steps will be taken for the welfare of traders’ community.

Booster shot of J&J’s vaccine increases protection against Covid-19 to 94...