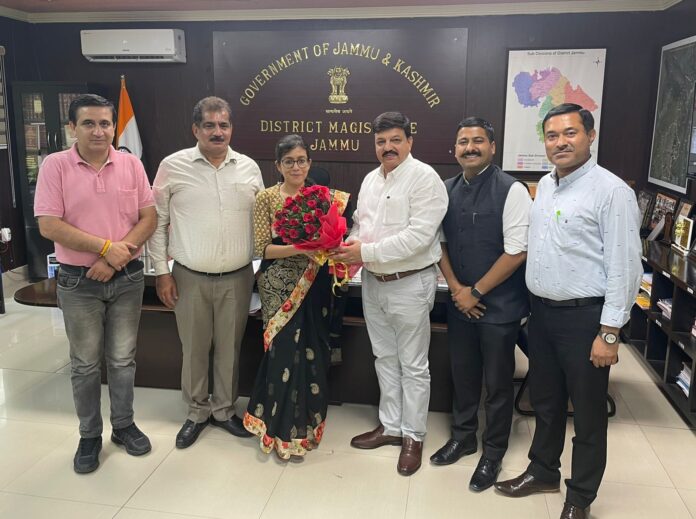 A team of Chamber of Commerce and Industry (CCI) Jammu led by its President Arun Gupta on Wednesday met Avny Lavasa and discussed various issues related to trading community.

Felicitating Avny Lavasa for her appointment as Deputy Commissioner Jammu, Arun Gupta said that the Jammu Chamber has lots of hopes from the new Deputy Commissioner Jammu as her tenure as Commissioner JMC was also stupendous because areas falling under Jammu Municipal Corporation have witnessed many drastic changes under her headship. “It was under your term that Jammu Municipal Corporation won the second prize for ‘Best Municipal Corporation in the Plastic Waste Management category’ at the Plastic Recycling Conference Asia 2.0. Of course, it was Avni Lavasa’s out of the box initiatives that have ensured recognition to JMC for its pioneering efforts in the field of plastic recycling”,

Arun Gupta said, adding that Jammu is looking forward for the better ties between traders and the administration. He said that people of Jammu are fortunate enough to have such a seasoned officer as the DC.

Arun Gupta said that the aforesaid things have been arbitrarily delayed at the DM’s office for the last over two months, thus causing trouble to gun manufacturer fraternity.

Upon listening to the issue of gun manufacturers, the DC Jammu assured to look into the matter at the earliest and also vowed to bring in procedural changes to streamline the entire process so that no one feels the pinch of arbitrariness of officials in the aforesaid office.

Avny Lavasa also thanked the CCI team for according warm welcome and assured that Jammu Administration will leave no stone unturned to mitigate the problems of businessmen of the region besides offering them pedestal for flourishing their establishments and businesses as never before.