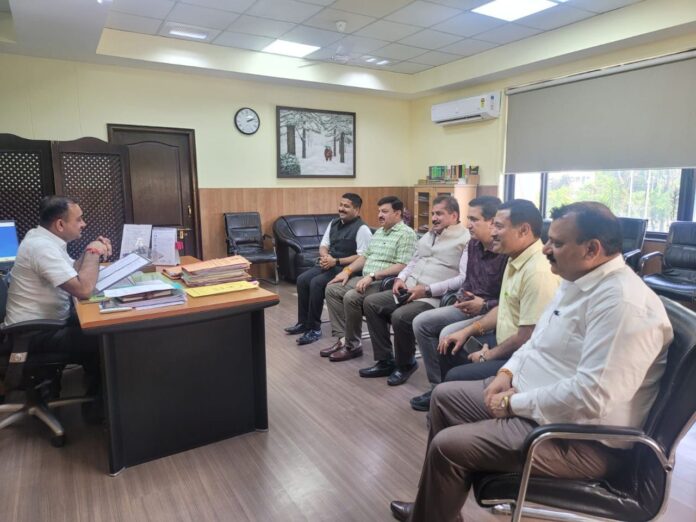 The Chamber of Commerce and Industry (CCI), Jammu on Friday urged Divisional Commissioner Jammu Ramesh Kumar to take measures for enhancing the tourist footfall in the Jammu region as the same was pivotal to give impetus to the local economy and generate employment avenues.

The CCI team led by its President Arun Gupta called on the Div Com and discussed various issues of vital nature with regard to trade and economy of Jammu region.

In a cordial meeting with Ramesh Kumar, the CCI President took up the important issue of reviving business of Jammu region especially after the impact it had due to trains chugging directly towards Katra and as per reports sooner than later to Valley. He said that like the Pathankot city of Punjab, the government should not allow the collapse of business of Jammu city as people will prefer to go straight to Katra and Kashmir without breaking their journey in the Temple City. He said that this is a very crucial issue and therefore people who matter must come up with promising solutions to ensure that Jammu doesn’t become another Pathankot.

Jammu Chamber demanded that need of the time is to provide fillip to tourism in Jammu by utilizing its splendid natural beauty so that visitors to the UT were compelled to make a break journey and enhance local economy as reports are averring that train link to Kashmir will be established before the end of 2023, making it critical for the businessmen in Jammu.

Arun Gupta also demanded that the government should streamline the system to facilitate traders who have to communicate with various government departments on one issue or the other under the J&K government’s policy of ease of doing business. The issue of expediting projects under the Smart City initiative was also highlighted in the meeting and it was said that proper monitoring should be made to ensure quality works.

The President CCI Jammu also demanded immediate blacktopping of the road from Bahu Fort to Har Ki Pouri Mandir, as presently the road is in shambles giving a bad name to authorities which are responsible for the work.

After listening to the demands and issues of the CCI team, the Divisional Commissioner exhibiting a very positive gesture asserted that the issues raised are of great importance as far as traders’ fraternity and the common man in Jammu is concerned. Showing extraordinary keenness, he assured that he will try his best to resolve all the problems and will soon come up with the plan to ensure that business in Jammu will not face any dent rather it should flourish better than before.