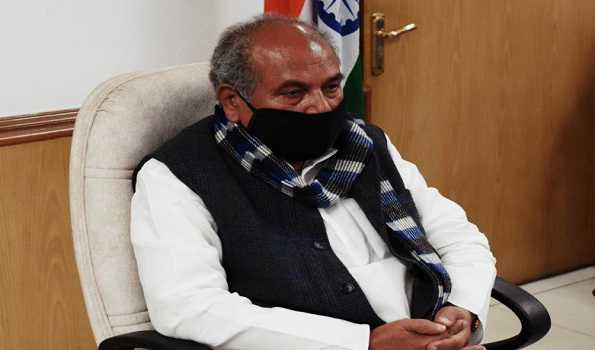 New Delhi, Dec 18 (UNI) Agriculture Minister Narendra Singh Tomar on Friday said that talks are on with the farmer organisations regarding their demands and soon a solution will be chalked out.

The Farmers Producer Organisation (FPO) representatives from MP, Rajasthan, Maharashtra , Gujarat and Haryana had shared their experiences with the Minister on Thursday and said that the farmers have benefitted from the open market system under the new farm laws and there was relief after getting the payments within three days.

The progressive farmers have said that due to the removal of the multi layer tax system as a result of the new laws, they are getting financial benefit to a great extent.

He said that Prime Minister Narendra Modi government is determined to double the farmers income and improve their standard of living by the year 2022, and, it was in 2014 soon after coming into power he had started working towards the same.

During the past six years several important works have been done , and the new agri reform laws is one of the most important amongst those.

The Minister said that 80 per cent of the farmers in the country are small scale farmers who cannot produce expensive crops and because their volume of production is less, it is difficult for them to fetch more value from their crops, therefore, through the FPOs small groups farmers are being made to benefit them.

Mr Modi has announced to form 10 thousand new FPOs and the government is going to spend Rs 6,850 on them.

The new farms laws are getting support throughout the nation, he added and further said that farmers from across the country are contacting through phone calls and extending their support. However, he said on the other hand some people are also misleading the farmers and doing politics over it.

Meanwhile, farmers’ agitation entered 23rd day on Friday while more of them continued to join at the Singhu and other important border points of the National Capital.

According to local reports, the protesting farmers who have decided to stand ground until there demands are met, have started preparing for adverse weather conditions amid the intensifying cold in the northern region.

Farmers were seen readying up better tents and enhance their makeshift arrangements to battle the cold wave like conditions keeping in view the elderly who are also participating in the agitation.

Many groups have come out to support he farmers for medical aid , sanitation services and others.

Several farmers have lost their lives braving the harsh conditions out on the road during the on going protest.

KLiKK pays tribute to Soumitra Chattopadhyay on his 86th Birthday