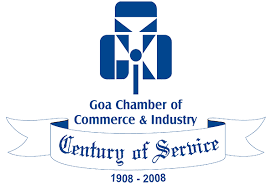 Panaji, Jul 31 : Goa Chamber of Commerce and Industry (GCCI) President Ralp De Sousa alongwith Director General Kishore Shah, GCCI –Taxation Sub committee Chairman CA Rohan Bhandare and CA Gaurav Kenkre visited State GST Commissioner Hemant Kumar, IAS, at the newly-commissioned State GST office at Rajya Kar Bhavan, Altinho, in the city on Friday.
Mr De Sousa greeted the Commissioner with bouquet and handed over the 113th AGM report of the Chamber and its flagship monthly magazine “GCCI-Bulletin”. The President shared the long standing legacy, contribution of the Chamber, its services and publications which was appreciated by the Commissioner.
Mr De Sousa raised the issue of OTS –VAT and also extended a collaborative approach to alleviate the issues faced by traders, industries owing to lack of awareness, migration to new systems so as to create a healthy compliance and seamless trade facilitation.
Mr Kumar also equally reciprocated and showed eagerness to have joint awareness programs. He also shared the issues related to eway bill compliances.
The GCCI President also suggested that the chamber would be more than happy to include any notifications, amendments, awareness related information in its weekly enews bulletin to ensure that reaches to the business community in time, a statement from the GCCI said.

SKUAST-JAMMU ORGANIZES TRAINNG ON ALTERNATE BEARING OF MANGO FOR FARMERS