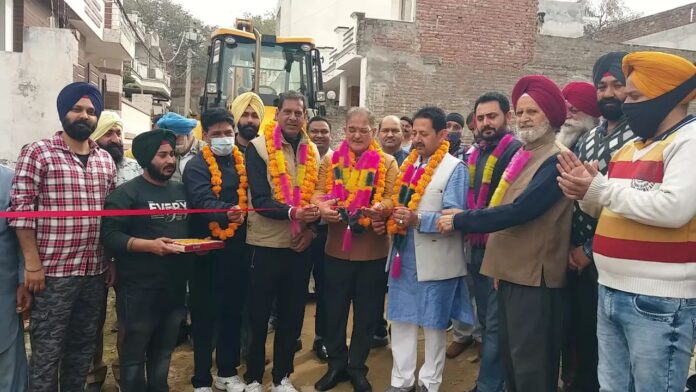 JAMMU, FEB 25: Former Deputy Chief Minister and Ex-MLA Gandhi Nagar, Kavinder Gupta along with former Public Health and Sanitation Committee Chairman Baldev Billowria, District President Vinay Gupta and Mandal President Bharat Bhushan kick-started the work of tiling and that of lanes and drains in Ward No: 56 Gangyal.
While addressing the gathering on the occasion, senior BJP leader Kavinder Gupta said Gangyal Ward 56 is the first ward which has become a Model Ward in the Gandhi Nagar constituency as more than 90 per cent Civic works have been completed which include construction and repairs of lanes and drains, tiling works, etc and the pending around ten percent of works including the today’s work are expected to be completed well before the end of this fiscal year.
While elaborating about the prestigious projects completed in the ward, the senior BJP leader said that Rajiv Gandhi Hospital which was earlier only a referral hospital, has now started providing OPD services besides conducting surgeries in its latest state of art operation theatre. He informed that there is also a nursing college worth Rs. 12 cr in Ward No: 56 Gangyal.
The former Dy Chief Minister said that credit goes to the representative of this Ward for over all development of this ward which has also a well developed Shaheedi Park stretching upto three Km along the canal that has incurred an expenditure of around Rs 7 crore. He said that development works are going on unabated with proactive efforts of the men and machinery of the Jammu Municipal Corporation and the PWD Roads and Buildings Department. He said that the works done especially in this ward are highly appreciable with full kudos to the representatives a d the people of this ward.
Kavinder Gupta said that BJP believes in ‘Sabka Saath, Sabka Vikaas, Sabka Vishwas’ as a result of which the party has been progressing by leaps and bounds with each passing day. He said that it is the ground performance of the party and its Modi led Govt at the Centre that speaks itself of the unprecedented pace of developmental works going on across the nation especially in J&K UT. He said the Govt is committed to overall development of every area and urged the people to ensure proactive participation by monitoring the works themselves.
Prominent among others present on the occasion were Ranjit Singh, Hardeep Singh, Jhanda Singh, Sunil Sharma, Abhinandan Sharma, Mukh Raj, Om Nath besides a large number of locals of the area.

Delhi wakes up to foggy morning; Min temp drops to 4.2...