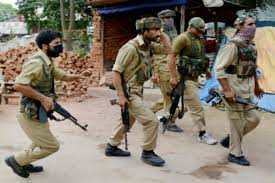 Jammu, Dec 4 (UNI) Coming down heavily on anti-national elements especially after the abrogation of Article 370, security forces this year so far in eleven months have neutralized 211 terrorists and arrested as many as 47 in various combat operations across the Union Territory of Jammu and Kashmir.
Defence sources sharing details with the UNI here on Friday said that in the year 2019, total 152 terrorists were killed but this year from January till November 22, security forces have neutralised 211 terrorists of different ‘tanzeems’ (outfits) including of Pakistan originated Jaish-e-Mohammad, Lashkar-e-Toiba and Hizb-ul-Mujaheedin.
They said, “Despite commitments towards fighting COVID 19, Indian Army has ensured that terrorists remain on the run for their life and their numbers as well as leadership remains at the lowest ebb.”
“As a part of this commitment, as many as 211 terrorists have been eliminated in the past 11 months in the Union Territory of Jammu and Kashmir and 47 have been apprehended whereas in 43 were nabbed in the year 2019,” sources said.
They further added that seven terrorists had surrendered so far while 161 locally recruited terrorists and 50 foreign terrorists have been killed in various operations till November 22 and in 2019, this figure was 120.
“As far as infiltration attempts are concerned, this year in 11 months, ten bids were made out of it, terrorists were eliminated in six attempts and in four others, the attempt was foiled by pushing them back.
Moreover, sources said that as many as 370 to 400 terrorists were waiting at the launch pads to infiltrate into the Indian Territory, adding, “last year, the figure was between 325 to 350 in North of Pir Panjal and 195 to 205 in the South side.”
Meanwhile, 148 fresh recruitments were made till this period in differ outfits and 44 others wanted in different terrorist activities, are absconding.
Sources also said that as per intelligence inputs, there are 272 assessed terrorists active across the Union Territory including 129 are local terrorists and 143 are foreigners.
The previous figure of assessed terrorists in nine months (active and dormant) in North of Pir Panjal was 223 and the figure in 2019 was 351 whereas in the South side, there were 69 and 70 in 2019.