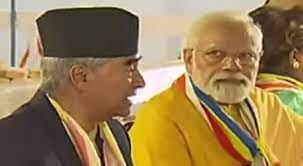 Kathmandu/New Delhi, May 16 : Prime Minister Narendra Modi, who is on a day-long visit to Lumbini, and his Nepalese counterpart Sher Bahadur Deuba will hold bilateral talks on Monday with focus on the construction of hydropower projects, development of physical infrastructure of Nepal and expansion of connectivity. In the bilateral talks to be held between the delegations headed by both the Prime Ministers, matters related to overall mutual benefits and interests as well as enhancement of trade, tourism, investment and people-to-people relations would be discussed, a media report said. An official of the Ministry of Foreign Affairs (MOFA) told My Republica that the agenda related to development assistance for infrastructure development of education and health sectors, trade facilitation, mutual benefits, collaboration and partnership promotion would be emphatically raised in the talks. Nepal’s Ambassador to India Shanker Prasad Sharma said that PM Deuba’s New Delhi visit in April and Memorandum of Understandings (MoUs) signed on the occasion would be reviewed. Likewise, ideas would be exchanged on exploring measures to be adopted for the speedy implementation of the projects and initiatives, Sharma further explained. “I am hopeful that the agendas related to education, health, connectivity expansion and partnership strengthening in cultural sector would take the centre stage in the talks”, Ambassador Sharma told the daily. According to the Nepalese foreign ministry, the PM Deuba-led delegation comprises ministers for home, foreign affairs, physical infrastructure and transport, energy, culture, tourism and civil aviation, education, science and technology, chief secretary, foreign secretary and Ambassador Sharma among others. Likewise, PM Modi-led Indian delegation comprises Foreign Secretary Vinay Mohan Kwatra, joint-secretaries of ministry of external affairs and Kathmandu-based Charge d’ affaires of Indian Embassy Namgya Khampa.