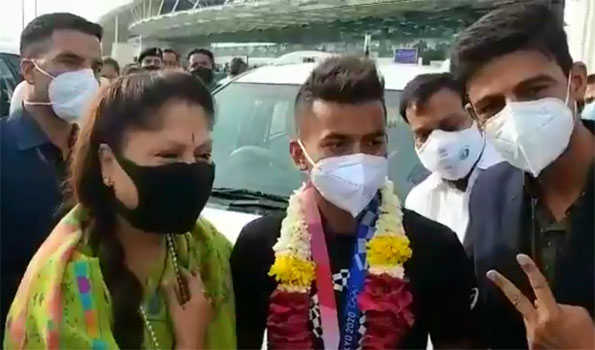 Bhopal, Aug 12 : “Next time, we shall alter the colour of the medal,” were the confident words spoken on Thursday by hockey player Vivek Sagar who played a cardinal role in the national men’s team winning the bronze at the Tokyo Olympics.

Sagar – who hails from Itarsi in Madhya Pradesh’s Hoshangabad District – arrived here by the regular flight this morning. He was accorded a rousing welcome at the Airport by state Sports and Youth Welfare Minister Yashodhara Raje Scindia, Director Pawan Jain and sports enthusiasts.
“Prime Minister Narendra Modi’s discussion over phone with the team prior to a crucial match injected us with enthusiasm and definitely inspired us to perform better. The citizens had tremendous expectations and we endeavoured to give our best,” the player said during a brief interaction with the press.

Speaking on the occasion; the Minister said, “Vivek has made a stupendous beginning and will be an inspiration to other sportspersons.” She respectfully touched the medal to her forehead even as her eyes moistened.
Later in the day, Sagar will be presented a cheque for Rs 1 crore by the state dispensation during a programme at the city’s grand Minto Hall. Chief Minister Shivraj Singh Chouhan shall be the Chief Guest at the event. Besides, Mr Chouhan and Sagar will plant a sapling.

Japan yet to consider Russian vaccine against COVID-19 – Health Ministry