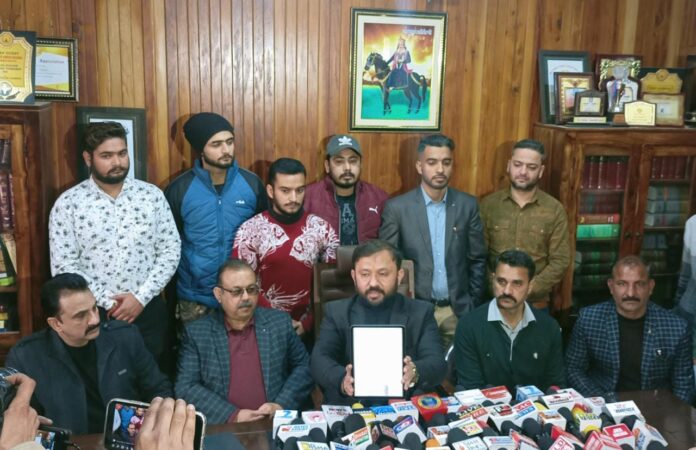 JAMMU, Dec 30: We in Ikkjutt Jammu are very pleased to inform that the Election Commission of India on Wednesday registered Ikkjutt Jammu as a political party. Recognition of IkkJutt Jammu as a political party has come at a critical point in the history of Jammu. We now have a political instrument to lift the seven decades old seige on the nationalists living in Jammu and Kashmir. The helplessness created by political optionless in Jammu now stands cured. We now have an option to reject the political culture that has enslaved us and made us subject people of a Hegemonic Communal order said Ankur Sharma, President IkkJutt Jammu Party.

Ikkjutt Jammu is the only party in Jammu which is religiously and single-mindedly devoted to the national cause in this strategic region. It has its unwavering committment the novel cause of the long-suffering people of Jammu province, irrespective of their caste, colour and creed. Ankur Sharma said that we were convinced that only a regional party could protect, watch and further promote the general socio-cultural and politico-economic rights of the people of the willfully ignored and politically marginalized Jammu province. The national parties like the Congress and the BJP have consistently ignored the aspirations of the people of Jammu province in their desperate bid to appease radical Islamists in Kashmir. Both these parties reduced Jammu province to the status of a Kashmir’s colony and the citizens of Jammu province as mere subjects whose life was not one of social, cultural, economic and political aspirations.

It’s matter of pride and a great moment for the people of Jammu province that they would now have a party, which will of them, by them and for them said Ikkjutt Jammu President, Mr. Sharma.

Reflecting on the aims and objectives of the Ikkjutt Jammu, its chairman Ankur Sharma said that its fundamental watchwords and battle-cries are three: Promotion of national cause, fight against demographic invasion and establishment of separate Jammu State.

“Ikkjutt Jammu Party is convinced that there is but one way in which the national cause in this region is promoted, demographic invasion defeated, impending disaster facing Jammu province and its citizens averted, Jammu province fully empowered to manage their own affairs and all sections of Jammu population got their fair share in the administration and governance and that is by obtaining the status of full state for this culturally, socially, economically, geographically, historically and politically distinct region,” said the Ikkjutt Jammu chairman. He added that we in the Ikkjutt Jammu will take rest only after achieving our stated goals.

Ankur Sharma urged the Narendra Modi Government to give up the idea of holding elections in the UT of J&K after the completion of the ongoing delimitation exercise based on the fudged 2011 census figures. He warned that such an exercise will only hurt the nation in J&K, reestablish the misrule of radical and subversive Abdullahs, Muftis, Bukharis and others of their ilk in Kashmir and negate all the positive effects of abrogation of 370/35-A. “Elections must be held only after Jammu province is separated from the jihad-gripped and jihadi-controlled Kashmir,” he said.

Ankur Sharma also appealed to the people of Jammu province to join Ikkjutt Jammu in large numbers so that the national cause is promoted, Zameen jihad defeated and they attained a status they deserved in the Indian polity and became a master in their own Jammu house under the Indian Constitution.