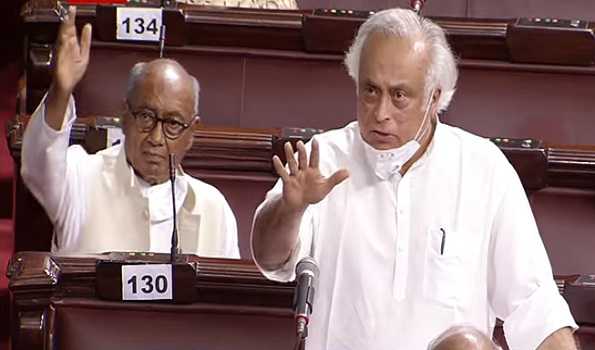 New Delhi, Mar 22 (UNI) The Congress Member Jairam Ramesh while speaking on the Mines and Mineral (Amendment) Bill 2021, said that by passing this Bill today, the Parliament was going against the consensus as many have favoured sending the bill to the Parliamentary Standing Committee.

Expressing concern on the Section 13 of the Bill, he said some sections of the bill have diluted the power and constitutional obligations of the State and stressed on the need to send the bill to the Select Committee.

Earlier, debating on the Bill, the YSR Congress Member Vijai Sai Reddy said that the Bill should not be passed in its present form. “It is pro-private sector and could be construed as anti people at large. Clause 4 amendment says private entities may be notified. This is definitely giving boost to private sector, not opposing but it should not be at the cost of public sector. Nothing in the Bill says that the minerals should be allocated to government entities”, Mr Reddy said.

“Finance Minister had said that the commercial mining on revenue sharing basis. In that case, why not give 50 mines to public sector. This bill gives a right to auction mines to Central government, this is nothing but usurping the power,” he added.

Samajwadi party Member Ram Gopal Yadav said that when corruption emerged during UPA time in the auctions, this government thought let us bring it afresh. “Coal India will be finished and private companies will rule. You may say this Bill will generate revenue and give employment, but you propose to sell 50 percent and will this leave public sectors to survive”,” Mr Yadav asked.

The SP lawmaker also asked that what was the need to rush through this Bill? Why cannot you send it to Select Committee, we said this for farm laws too, then the farmers agitation would not have taken place, he asked.

“You will give the mine to somebody and the land owner will say I am not giving. PSUs will be finished if this Bill is passed,” he added.

Samir Oraon of BJP said wherever the tribals are, the mineral reserves can be found. Despite that, Tribals are financially deprived and the opposition is to blame for that, he claimed. He also said that the Modi government has improved the condition of tribal and has removed the discrepancies done by the previous government.

Syed Nasir Hussain of Congress said “One lakh crore mining scam in Karantaka before 2015, the current Chief Minister had to resign then and was arrested. Adani enterprises was also indicted in that scam. Which is the lobby behind multiple amendments to this bill?”

“You are going towards one nation one party. DMF should be left to district officials, should not be decided someone sitting in Delhi. This Bill is to help crony capitalists. Send the bill to select committee,” he added.