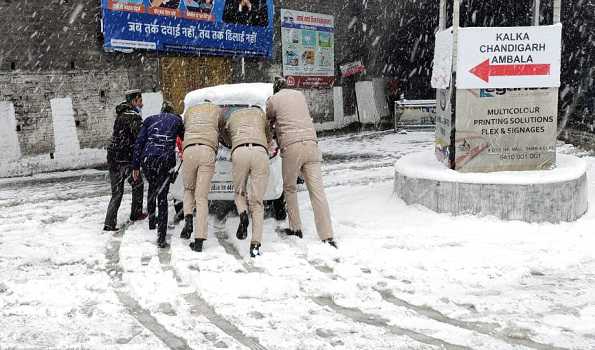 Shimla, Feb 5 (UNI) This capital town had the longest spell of snowfall in last 24 hrs as 57 cm fresh snowfall was recorded by the Met Office. Shimla Met Office said that town had 57 cm snowfall from 1730 to 0830 hrs which heaviest in past Money years in the Month of February.
The high altitude sports center Shilaro received 55 cm snow, Khadrala 49cm, Sarahan 12 cm and Jubberhati six cm.

National Highway-5 is blocked since Thursday Morning between Shimla and Kumarsen and tourism resort Kufri, Fagu and Narkanda also recorded around two feet high Snowfall. Most places in the upper Shimla Incluiding the town are snowbound and power, traffic and water supply have crippling due to inclement weather.

Minimum temperature of Keylong was minus 7.2 degress, Narendra minus 5.3 degress, Kalpa minus 4.3 degress, Kufri minus 3.2 degress, Dalhousie minus 1.2 degress and Shimla minus one degrees.

Met Office forecast light rainfall or snowfall likely to occur at isolated places in the district of Kullu, L&S, Kinnaur and Sirmaur and Shimla. Rest part of the state will be dry. Tomorrow onwards i.e. from 6th Feb 2021, weather be dry for a week over the state.

Minimum temperatures are likely to fall by three-five degrees during next two days.

The final full dress rehearsal of the district level function of...

Ninety-yr-old woman allegedly raped and beaten up in Delhi