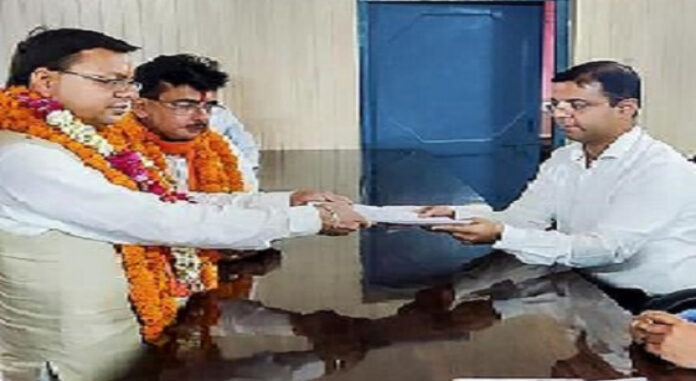 Dehradun, Chief Minister Pushkar Singh Dhami, who failed to get elected to the Uttarakhand Assembly in March, on Monday filed his nomination for the Champawat assembly constituency by-election due on May 31. Kailash Gahatodi, who vacated the seat for Dhami, accompanied Dhami. Supporters lined up the streets to welcome the Chief Minister from Khatima to Champawat, where he handed over the nomination papers to the Deputy District Election Officer. Union Minister of State for Defence and Tourism Ajay Bhatt, BJP state President Madan Kaushik and others greeted him. Champawat seat has over 96,000 voters: 50,057 males and 45,959 females. May 11 is the last date for filing nominations. The vote count will take place on June 3. Earlier in the day, Dhami and his wife Geeta prayed at the Chakarpur Bankhandi Mahadev Shiv Mandir Khatima in Udham Singh Nagar district. Dhami lost to Congress candidate Bhuwan Chandra Kapri from Khatima in the Assembly elections in which the BJP became the first party to retain power in Uttarakhand. It won 47 out of 70 seats.

India, US to strengthen WHO, Harsh Vardhan discusses Covid surge with...