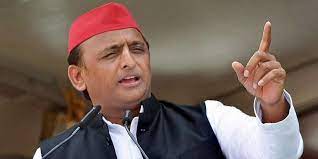 Jhansi (UP), May 5 : Samajwadi Party (SP) president Akhilesh Yadav on Thursday launched a scathing attack on the Bharatiya Janata Party (BJP) and the Uttar Pradesh Police and said during the BJP rule the police has grossly been misused and have been given so many rights that today the police stations have become the centers of anarchy. Addressing a press conference after meeting the Lalitpur rape victim and her family members, Akhilesh trained guns at the BJP government and the police and said, “When you will use the police for wrong purposes then how will you check its wrongdoings and high-handedness therefore the police stations have become centers of anarchy.” He said, “The Lalitpur incident is not the first incident. Incidents of police high-handedness are coming to fore regularly, who gave so many rights to the police? It is the result of this that the police which are supposed to protect the people have turned into a predator and when this happens then we should think in which direction we are heading.” He questioned the government when the services of the people involved in incidents like Lalitpur will be terminated. “Another case of misbehaviour with a woman has come to fore at a time when the Lalitpur incident is yet to settle down. UP is getting maximum notices on incidents of crime. It was due to the pressure created by the SP people that the government had to act against the police. Who gave the right to UP police? They move bulldozers wherever they feel like,” he said. The SP chief claimed that power plants were set up during his regime, but the BJP government failed to complete it. “A para-medical college was constructed in Jhansi, but it is lying vacant due to lack of budget. They talk about loudspeakers so that they do not have to reply on the issues of unemployment and inflation. A defence corridor has been set up in Bundelkhand and they claimed that fighter jets will be manufactured here, but now the central government is talking to France to buy jets. If fighter jets will come from foreign countries then who will buy the aircraft from the factory set up in Bundelkhand?,”

USD, Pound, Yen up; Euro down

Mamata to file her nomination for Nandigram Assembly constituency on Wednesday