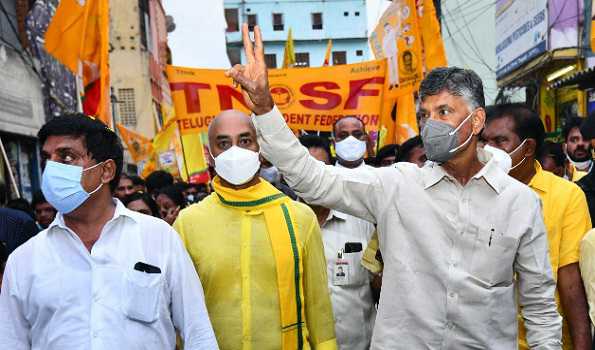 Telugu Desam Party national president former Chief Minister N Chandrababu Naidu participated in a rally and road show in Tirupati town as part of the Tirupati by-election campaign. The rally started from the railway station, passed through Karnala Street and Beri Street and participated in a public meeting at Krishnapuram Tana Tirupati Town.
TDP supremo started speaking by wishing the people a happy Ugadhi festive and said that the auspicious days are near. I was born in Tirupati and grew up at the feet of Venkateswara Swamy. I grew step by step before your eyes. The chief ministership is not new to me. Terrorists used 24 claymore explosives to kill me in Tirupati. But Venkateswara Swamy saved me. Again In 2014, people believed in me and made Telugudesam to be victorious in the elections. Both welfare-development are two eyes for Telugudesam.

Talking about the legacy he said that Tirupati City is a knowledge hub. That is why educational institutions like Venkateswara University were established by our ancestors. After the arrival of NTR, Padmavathi University, Padnavathi Medical College, SVIMS, BIRD, Cancer hospital etc. were established. But the YSRCP government has not laid a single soil in 21 months for the development of Tirupati.

‘Tirupati was made a clean city during the reign of Telugudesam. Keeping eeryone should have a house, 6,000 houses pattas were given and 3,700 houses constructed during the TDP regime’ opposition leader said‘Tirupati is the city of Sri Venkateswara Swamy. Millions of devotees visit here daily. We have done many development programs to make the city better’, Naidu said the development activities in the Chittoor during TDP rule he stressed ‘hundreds of companies, institutions have been brought to Tirupati City i.e International Institute of Digital Technology, IIT, IISER, hardware and software companies, Tirupati Airport and so on as to ensure our educated children to work in Tirupati without going anywhere for jobs.

With request of ‘one chance’ Jagan destroyed the state. He deceived the youth and university students in the name of special category status. Here in Chittor a YSRCP leader became like a mafia don. He put the police at the airport and tried to stop me. If I had thought Jagan Mohan Reddy would not have even done the his padayatra as opposition leader.

Not a single family was happy under the YSRCP rule. No one, including farmers, laborers, and women, happily living in the state. Corona cases are increasing day by day. Jagan failed to control Corona. Commodity prices are skyrocketing. Sugar has also been changed its taste to bitter in jagan’s rule. Petrols is going to hit the century (Rs.100).

Naidu talking about looting of YSRCP government said that Jagan is going to impose property Tax ten times more burden on the people than ever before. There were no street lights either. Tirupati Prasadam rates are also being increased and en-cashing. Rajasekhar Reddy tried to loot two hills of lord Venkateswara by saying it are five instead of seven. The chief priest says that Jagan Mohan Reddy is incarnation of Lord Vishnu. Rama statue was broken in Ramatirtham, the culprits have not been caught yet. Tirupati prasadam is also being distributing by YSRCP to houses to vote for. Where so many Venkanna Prasadams are coming for the YSRCP guys while it should be given a person one? What TTD board is doing, he questioned.

Talking about the employees during the TDP regime he said ‘all employees were given 43 percent Fitment. The retirement age has been raised from 52 to 60 years. DAs are given from time to time. Salaried paid directly to the employees of TTD, University, and Municipalities. But, in YSRCP rule 11, 000 TTD contract employees were not given super scale, time scale. Jagan is not in a position to even pay salaries to employees.TDP will always be a helping to all employees in the state.

Galla Jayadev, Kanakamedala Ravindra Kumar and Rammohan Naidu participated and said that we are fighting hard for the state. In order to show the befitting fight of Telugus in Delhi, Panabaka Lakshmi should be won by a huge majority. Ram Mohan Naidu criticized 22 YSRCP MPs for not opening their mouths on the Visakhapatnam steel industry. The young MP accepted the challenge that if YSRCP MPs resign for special status, as Telugudesam MPs we also would resign.

Stone pelting on NCBN: Road Show Chandrababu Naidu went on strike to protest against the stone pelting that happened at the end of the meeting targeting the crowd and TDP leaders. Naidu warned the persons who are responsible for the attack and said come forward and fight bravely if anything. Coming from backside and throwing stones is a coward act. Rowdy Rajyam is prevailing in the state. Police should maintain law and order. He warned that if the Telugu government comes to power, these bullying games will not be accepted.

Telugudesam AP president Achanna while talking about the stone pelting said, ‘confidence in the police has gone. Attack on The Leader of the Opposition is brutal. The Central Electoral Commission should take action on this immediately. This is not an attack on Chandrababu Naidu, but on democracy and demanded that the chief minister be held responsible for this.