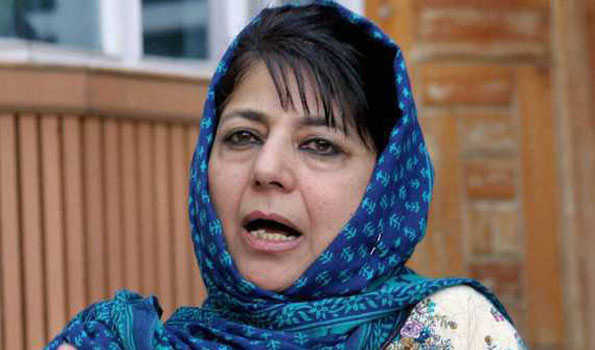 Peoples Democratic Party (PDP) president Mehbooba Mufti said that she agrees with West Bengal Chief Minister Mamata Banerjee that the opposition parties need to unite to protect democracy and its cherished values in the country.
Banerjee wrote to ten key opposition leaders — including Sonia Gandhi, Sharad Pawar, Uddhav Thackeray and Arvind Kejriwal, suggesting a big get-together for a strategy to take on the BJP after the current round of assembly polls. “Agree with @MamataOfficial di that in order to protect our democracy & its cherished values it is imperative for the opposition parties to unite. @derekobrienmp @AITCofficial,” Ms Mehbooba wrote on micro-blogging site twitter.
She also shared a copy of her letter written in response to Banerjee’s communication addressed to the opposition leaders. “Thank you for reaching out to me. I share & understand your apprehensions about the central government undermining the federal framework that has been guaranteed by the Indian Constitution,” she said in the letter.

Ms Mehbooba further alleged that the recent GNCTD bill is yet another example of how BJP is ‘bulldozing’ its opponents by using its brute majority to pass and implement bills’. “This process started in 2019 with the dismemberment of Jammu and Kashmir and stripping it of its special status which was again a constitutional guarantee. Unfortunately, not many in the opposition used their collective power & voice to oppose this unilateral & illegal step,” she alleged.
She further alleged that central agencies like NIA and ED have left no stone unturned to hound the people. “Therefore, the need of the hour is to unite & put up a collective fight against this onslaught,” she added.

We aim to vaccinate entire Delhi within 3 months: Chief Minister...