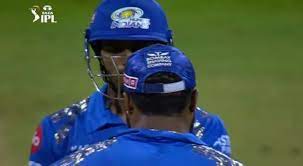 Mumbai, April 26 : Mumbai Indians, who have won the title 5 times, are all but out of the playoff race in this year’s IPL season. They have lost all 8 matches and are placed at the bottom of the points table with zero points. Mumbai will have to win all of their remaining 6 matches, but there are faint chances for them to qualify as their chances depend on all other teams. Moreover, Mumbai have a negative net run rate of 1 and they have to win by a big margin while wait for other results to go in their favour. If the top 5 teams reach 14 points, Mumbai will officially crash out. Mumbai will play remaining matches against Rajasthan Royals, Gujarat Titans, Kolkata Knight Riders, Chennai Super Kings, Sunrisers Hyderabad and Delhi Capitals. Meanwhile, CSK have managed only 4 wins in 8 matches and they need to win all their remaining games to enter the playoffs. However, they can also qualify with 5 wins, but a lot will have to go in their favour. Chennai will play their remaining matches against Hyderabad, Bangalore, Delhi, Mumbai, Gujarat and Rajasthan. On top of the points table are Gujarat Titans with 12 points from 7 matches, having lost just one game. They need to win 2 wins out of 7 matches to book a playoff berth as 16 points would be sufficent in a 10-team tournament. Gujarat’s remaining matches are against Hyderabad, Bangalore (twice), Punjab, Mumbai and Lucknow. Hyderabad have scripted one of the most remarkable turnarounds this season. They lost their first two games, but won the next five matches on the trot, climbing to the second position with 10 points from 7 matches. Hyderabad need to win at least three matches out of the remaining 7. They play remaining matches against Gujarat, Chennai, Delhi, Bangalore, Mumbai and Punjab. Rajasthan are placed third with 10 points. They have won 5 matches out of 7 and are proud franchise to own the orange and purple caps. Jos Butler and Yuzvendra Chahal have donned the orange and purple cap, respectively. Rajasthan need 3 wins in the remaining 7 fixtures. The remaining matches for them are against bangalore, Mumbai, Kolkata, Punjab, Delhi, Lucknow and Chennai. Lucknow are at No. 4 in the points table with 5 victories from 8 matches. All they need to do is to win at least three matches out of the remaining 6 matches to qualify for playoffs. They can also qualify with 14 points or two wins in 6 games but it will depend on other results. Their remaining matches are against Punjab, Delhi, Kolkata (twice), Gujarat and Rajasthan. Bangalore have garnered 5 wins in 8 matches, including 68-run all out humiliation against Hyderabad. They need to win 3 matches out of the remaining 6 games, but need to win with good margins as they have a negative net run rate of – 0.472. Two wins may not be enough for Bangalore as every loss will decrease their net run rate further. Remaining matches for them are against Rajasthan, Gujarat (twice), Chennai, Hyderabad and Punjab. Punjab also are in the mix for the playoffs after they bounced back to winning ways following a crunch win over defending champions Chennai, taking the franchise to 8 points. They need to win 4 out of 6 matches to qualify for playoffs and improve their net run rate as Ounjab have an NRR of – 0.419. They play Lucknow, Gujarat, Rajasthan, Bangalore, Delhi and Hyderabad. Delhi, which topped the points table last season, has failed to chug along. Covid cases also played a spoilsport in their last two matches. They have won only 3 out of 7 matches and need to win at least 5 to book their slots in the playoffs. Delhi need to win at least 5 out of 7 matches to seal the playoff berth. They can still qualify with 4 wins or 14 Points, but will depend on other results and NRR. Teir remaining matches are against Kolkata, Lucknow, Hyderabad, Chennai, Rajasthan, Punjab and Mumbai. Shreyas Iyer led Kolkata’s journey this season started with a fascinating win against defending champions Chennai, but has managed only 3 victories in 8 matches. They are on a 5-match losing streak. They need to win 5 matches. With four teams locked in at 10 points each, they may not be able to qualify with 14 points. Their remaining matches are against Delhi, Lucknow, Hyderabad, Chennai, Rajasthan, Punjab and Mumbai.

Ardeshir B.K. Dubash Receives the Order of Merit in the Diplomatic Service of Peru Jose Gregorio Paz Soldan from Government of Peru

DGP sanctions scholarship of over Rs 7.30 lakh to students