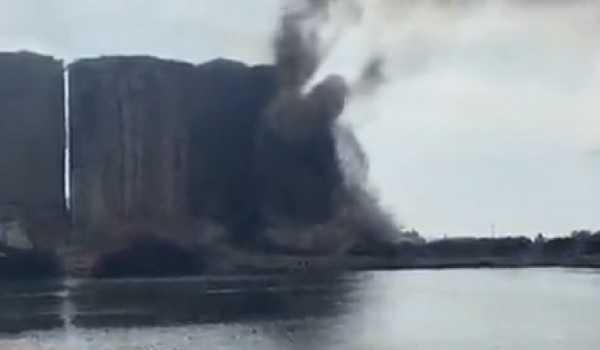 Beirut, Aug 1 : Part of the Lebanon capital port’s grain silos, damaged in a 2020 explosion, has collapsed. After a weeks-long fire, triggered by grains that had fermented and ignited in the summer heat, the silos crashed in a huge cloud of dust, Aljazeera reported.

The northern block of the silos toppled on Sunday, kicking up thick grey dust that enveloped the iconic structure and the port next to a residential area.

Youssef Mallah, from the Civil Defence department, said that other parts of the silos’ northern block were also at risk and that other sections of the giant ruin could collapse.

The 50-year-old, 48m (157-foot) tall silos withstood the force of the 2020 blast, effectively shielding the western part of the Lebanese capital, while over 200 people were killed, and more than 6,000 injured as entire neighbourhoods were damaged.

In July, a fire broke out in the northern block of the silos due to the fermenting grains.

Syria expects to get Coronavirus vaccine via COVAX in early April...

On World Toilet Day India strengthens its resolve of toilet for...

Nearly 21,000 chickens die of suffocation in fire in central France...