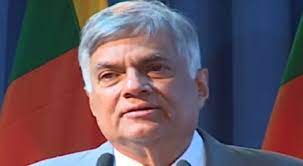 Colombo, May 16 : No one from the disgraced family of the Rajapaksas can ever become even a MP in Sri Lanka, new Prime Minister Ranil Wickremesinghe said in remarks published on Monday. The Island newspaper quoted Wickremesinghe as saying in an interview with the BBC Sinhala Service that in the current situation, none of the Rajapaksas now in or out of power can hope to enter Parliament once again, let alone be the President. He said this in response to the allegation that he (Wickremesinghe) had been appointed as the Prime Minister to save the Rajapaksas’ position until another member of the Rajapaksa family contests the next Presidential election. The Prime Minister accused the country’s media institutions of making members of the Rajapaksa family heroes. “They were brought by the media. I did not bring them, so go and ask the media. Go and ask the Sri Lankan media whether they were brought back or not. Why are you looking at me? I did not do anything wrong,” Wickremesinghe said lightheartedly. “I filed about 380 cases against them, I think, about 300 files. I was not the one who said they were heroes. Tell me one media institution that said not to vote for Gota, that they should go. So please go and ask them.” When asked about social media support, he said most social media at the time of the presidential election supported Gotabaya Rajapaksa as he was a political outsider. “When I said we need $7 billion for the next two years. When I said that I was called a liar, going to the West, to the IMF. The mainstream media and social media destroyed me. So, in the end what I said was right. So do not ask me what I did. I did not create all this. “When they were brought back to power, the media said that these cases against them were false. You are afraid to ask the question that needs to be asked from the media asking me instead. Please go back to the media to ask… I did not help (the Rajapaksas).” Wickremesinghe was named the new Prime Minister of Sri Lanka after Mahinda Rajapaksa resigned from the post a week ago amid violence and unending anti-government protests.