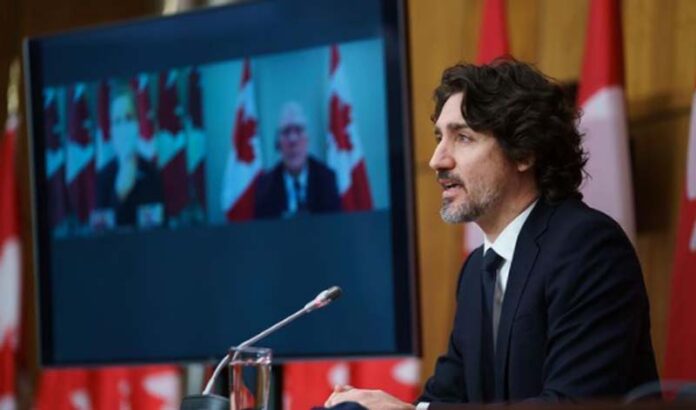 Prime Minister Justin Trudeau says now is not the right moment to engage in discussions about initiating constitutional change in Canada and severing ties with the British royal family.
The Prime Minister on Tuesday broke his silence concerning the bombshell interview in which Meghan Markle, the wife of Prince Harry, said she was silenced after joining the royal family, did not receive the support she had expected and accused the British crown of racism. The interview has spawned growing calls for Canada – whose official head of state is Queen Elizabeth II – to break ties with the British monarchy.

“I understand some people are looking for constitutional conversations, I’m not going to engage in those right now,” Trudeau told reporters.

The Prime Minister acknowledged that entire institutions in Canada are the byproduct of colonial, discriminatory and systemically racist past but rejected calls for their abolition, instead saying that the government must listen to Canadians, understand the existing inequalities and inequities and work on improving and transforming them.

However, even in advance of Sunday’s interview, polls show that Canadians are increasingly skeptical in their support for Queen Elizabeth II as the official head of state and the future of the monarchy in the country.

An Angus Reid Institute poll published last month revealed that only half of Canadians expressed a willingness to recognize Queen Elizabeth II as the official head of state and only 32 percent of Canadians believe that the country should remain a constitutional monarchy going forward – down from 42 percent in April 2016.

The British monarchy’s popularity in Canada has taken significant blows in recent memory, including the scandalous resignation of the Queen’s representative in the country after a damning report concerning widespread harassment of employees at Rideau Hall – the Monarch or its representative’s residence in Ottawa – was made public and the ongoing calls for Prince Andrew to testify about Jeffrey Epstein’s pedophile sex ring.

Markle and Prince Harry stepped back from royal duties last year and moved to the United States with their son. In February of this year they informed Queen Elizabeth II that they would not return as working members of the UK royal family. Prince Harry said that the mental health impact of the “toxic” UK press played a part in the decision.

EPFO adds 14.65 lakh subscribers in July, nearly half of them...