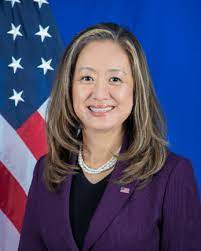 Colombo, May 7 : Ambassadors of the US, the UK and the European Union delegation in Sri Lanka on Saturday expressed their concern over the state of emergency in the island nation. On Friday, Sri Lankan President Gotabaya Rajapaksa had declared a state of emergency as protests intensified, calling for his resignation amid a sharp economic downturn. US Ambassador Julie Chung said the state of emergency would not help the island. “Concerned by another State of Emergency,” she said in a tweet, Chung said the country needs long term solutions to set it back on a path towards prosperity and opportunity for all. “The voices of peaceful citizens need to be heard. And the very real challenges Sri Lankans are facing require long term solutions to set the country back on a path toward prosperity and opportunity for all. The SOE won’t help do that,” she tweeted. British Ambassador Sarah Hulton OBE said that emergency laws restricting the rights work against democratic dialogue and solutions. “A democratic and peaceful approach is essential to resolving the current challenges. Rights to peaceful protest and freedom of expression must be respected alongside all fundamental rights. Emergency laws restricting those rights work against democratic dialogue and solutions,” the UK ambassador tweeted. The EU delegation in the island nation also said that the state of emergency could have a counter productive effect. “A month of peaceful demonstrations has shown how Sri Lankan citizens fully enjoy their right to freedom of expression in the oldest democracy in South Asia. State of emergency will certainly not help solving the country’s difficulties and could have a counter productive effect!,” Delegation of the EU to Sri Lanka tweeted. The Emergency gives sweeping powers for authorities to break up the protests. Gotabaya’s office said the decision was to ensure public security and maintain essential services, so as to make sure smooth functioning of the country, NewsWire said. “Under no circumstances Gotabaya Rajapaksa will you hold this country down with nothing but fear & violence. The state of emergency runs counter to seeking any solution to the crisis. JUST RESIGN,” Sajith Premadasa, Leader of the Opposition of Sri Lanka said in a tweet, just after the state of emergency was declared in the island

13th edition of LaLitTana brings together Indian and Malagasy poets for...