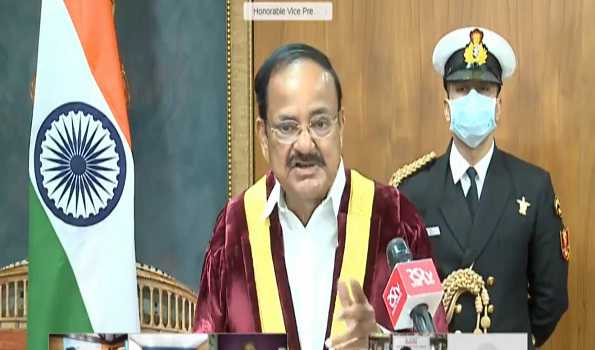 New Delhi, Nov 26 (UNI) Vice-President M Venkaiah Naidu on Thursday called upon the universities and educators to re-evaluate the education system to make it more value-based, holistic and complete.
Addressing the 13th e-convocation of ICFAI University, Sikkim, through video-conferencing today, Mr Naidu asked the educators to take inspiration from the holistic Vedic education and understand the vision behind New Education Policy.

Quoting Gurudev Rabindranath Tagore, the Vice President said that education without values is no education at all. “Educational institutions and universities are expected to produce well-rounded and compassionate human beings and not mere degree holders,” he said and rued that often, this aspect gets ignored in the race for paychecks.

Highlighting that values had always been emphasised in ancient Indian systems, he said the New Education Policy also envisages these ideals and aims at making India a “Vishwa guru” once again.