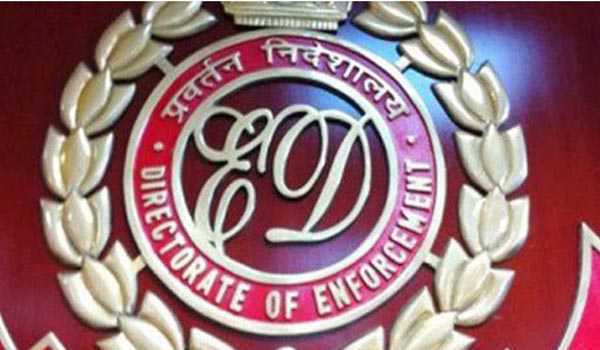 New Delhi, Dec 15 (UNI) Enforcement Directorate (ED) on Tuesday said that it has filed prosecution complaint before the Special PMLA Court at Ahmedabad against Hirak Biotech Ltd and its directors Pratik R Shah and Niketa Baldevbhai Dave under Prevention of Money Laundering Act, 2002 (PMLA) in a loan default case. The Platinum Corporation Ltd, Hirak Biotech Ltd and its directors were involved in the siphoning of bank loan availed from Ahmedabad Peoples Cooperative Bank Ltd and a provisional attachment order was issued on December 8 under PMLA on identification of ‘Proceeds of Crime’ in the form of 16 plots located at Village – Sachana, Taluka Viramgam in Ahmedabad district of worth Rs 10.07 Crore. These attached assets were held in the name of Hirak Biotech Ltd, Ahmedabad.

The Central financial probe agency initiated investigations under PMLA on the basis of a charge sheet filed by CID Crime Gandhinagar against various persons for commission of offences under section 406, 409, 420, 467, 468, 120B and 114 of IPC, 1860.“ Pratik R Shah in conspiracy with other accused fraudulently availed loan/overdraft facility against Fixed Deposits from the bank and also increased overdraft limit without any resolution and withdrew beyond the overdraft limit without any security. In this manner the accused defaulted the loan sanctioned by APCBL and thereby causing loss of Rs.25.25 Crores to the bank”, the probe agency said the charge sheet.

So far, after attachment of the ‘Proceeds of Crime’ to the tune of Rs 10.07 Crore, Prosecution Complaint has been filed before the PMLA court for confiscation of the attached assets to the tune of Rs. 10.07 Crore apart from awarding punishment to the accused persons, the ED said, adding that the further investigation in this case under progress.

India records 572 pc growth in grant of Patents in last...