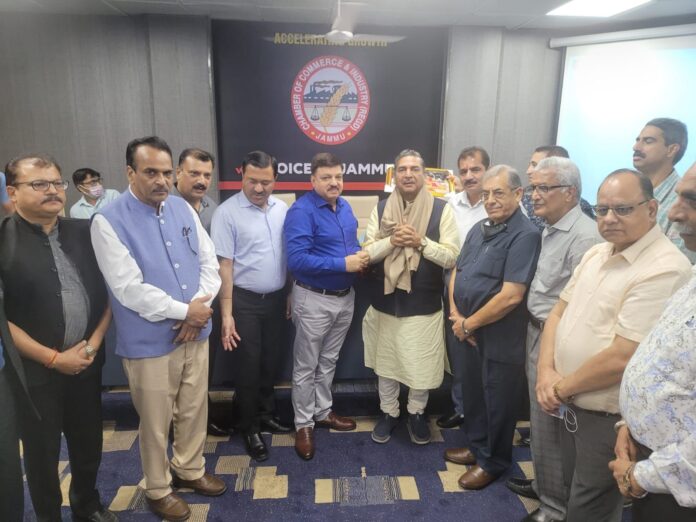 The prevailing critical situation in Kashmir after the spate of killings of non-local workers can affect the industry in the Jammu region as tourists and devotees can change their plans to visit the UT in the ensuing winters.

The visiting guest held a threadbare discussion with the Chamber team on various burning issues related to the Jammu region and the current boiling situation in Kashmir, wherein people are fleeing out of fear of targeted killings.

The other issues which were part of the discussion include the demand of tweaking the J&K Land Act to provide justice to Mahajan, Khatri, Jain and Sikh communities which are presently barred from buying agricultural land, giving adequate relaxation to liquor bar owners for renewal of their licenses, rehabilitating the genuine wine shop owners who lost their livelihood due to e-auction of new shops, finding via-media to save small traders from the Reliance stores which are about to come to UT in a big number, making things clear in case of Darbar Move especially with regard to twin capital cities because it is vital to redefine the status of capital cities in J&K, annulling the passenger tax in line with other UTs, and the issue of residents of various colonies in Jammu who have been asked to vacate land chunks of their plots citing some 60 years’ old order. The CCI President however lauded the UT administration for its endeavours in resolving many issues which the people of the UT are confronting with.

Arun Gupta condemned the killings of innocent people in the Kashmir valley. He said that such incidents act as bottlenecks in the way of speeding up economic activities in the UT and frighten the people especially those communities which are being targeted. He appealed to the LG administration to take cognizance of the worsening situation in the valley and take proactive and persuasive steps to stop such type of incidents so that the people feel secure.

The CCI team also congratulated Yash Pal Gupta on being reelected as President of Retailers Federation of Jammu.

President CCI also appreciated the efforts of the Central as well as LG Government for signing a MOU between the J&K Government and the Dubai Government regarding investment in the real estate sector, IT Towers, Hospitals, Medical Colleges, Multipurpose towers, etc. He said that these types of developments will not only boost the economy of UT of J&K but will also provide employment opportunities to the educated youth. He hoped that the MOU signed will be implemented in the real sense and spirit for the overall development of Jammu and Kashmir.

About 18pc polling recorded in Hamirpur in first two hours

Cycle Pure creates ‘The Bhagavad Gita in 3 minutes’ for millennials