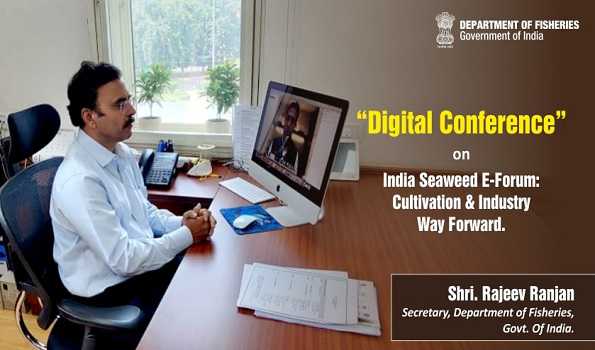 Kolkata, Sep 04 (UNI) India is the fourth largest seafood producer and second largest aquaculture producer and Rs 640 crore fund has been allocated for seaweed sector. Stating this in an e-conference on Seaweed, organised by the Indian Chamber of Commerce (ICC), yesterday, Dr Rajeev Ranjan, Secretary, Department of Fisheries – Ministry of Fisheries, Animal Husbandry & Dairying, explained that the Union Government was also funding support for implementing largescale projects for production of edible seaweeds and application of seaweed-based products.

” Seaweed cultivation, as a diversification activity in mariculture, has tremendous potential all along the Indian coast, ” he said adding, ” Seaweeds are rich in vitamins and minerals and are consumed as food in various parts of the world and produce phytochemicals. “

He stressed that the R&D would play a significant role in the edible seaweed sector.

Dr J Balaji, Joint Secretary, Marine Fisheries, Dept of Fisheries, Ministry of Fisheries, Animal Husbandry and Dairying, said, ” A huge domestic demand for seaweeds prevails in India and Government is encouraging to start-ups to venture into this field; financial support up to Rs three crore can be provided to the incubation centers for gearing start-ups in this sector. “

Dr G S Sameeran, Director of Fisheries, Department of Fisheries, Animal Husbandry & Dairying, Govt. of Tamil Nadu, mentioned that mariculture is sustainable and it will play a vital role in increasing fish production, including seaweeds from the coastal waters.

He also pointed out that the Government of Tamil Nadu is a pioneer in providing hands-on training to fisherfolk on seaweed culture.

According to Dr Vaibhav Mantri – Principal Scientist, CSMCRI, commercial harvesting of seaweeds have a USD 12 billion market value and they have a beneficial effect in protecting the climate.

Taj Mahal to reopen from Sep 21; 5k tourists to allowed...

Peace between National Socialist Council of Nagaland (IM) and Government of...