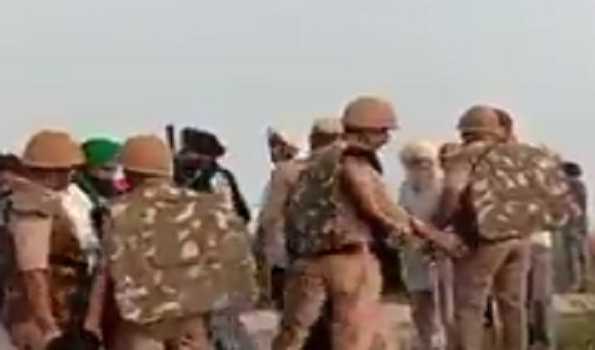 Lakhimpur Kheri, Oct 8 : Union minister of state for home Ajay Mishra Teni’s son Ashish has not reported at the crime branch here on Friday till 1000 hrs.
Entire police teams are stationed at the crime branch but Ashish Mishra is still absconding, sources here said.
On the other hand it has been reported that Ashish could have fled to nearby Nepal through Uttarakhand as his last mobile location was detected at Gaurifanta in Uttarakhand last night, which is very close to the Nepal border, the sources added.
The police team would wait for another 2 hours for Ashish and then will proceed for formalities to declare him absconding, if there is no response from him.
Yesterday, Ashish was asked to appear before the police at 1000 hrs at the crime branch on Friday and the summons were pasted outside his residence in Shahpur Kothi locality.
The summon was issued under section 160 of the CrPC. It was presumed that Ashish would be arrested after his interrogation today.

Police had arrested two persons identified as Luvkush Rana and Ashish Pandey yesterday. The two arrested are close aides of Ashish Mishra and more raids are going on to arrest the prime accused. Half a dozen other suspects have been also detained for interrogation in the matter, disclosed a senior officer.

Besides Ashish, another high profile accused, Ankit Das, whose name came up in one of the videos and who was allegedly present in his SUV, behind the Thar jeep of Ashish Mishra, was also absconding.

Ankit is nephew of former BSP MP Akhilesh Das and SUV (burnt by the mob later) also went crushing the farmers after the Thar Jeep hit the farmers. Sources said that Ankit is very close to union minister Ajay Mishra and was often seen with minister’s son Ashish.
It may be mentioned that the Lakhimpur Kheri violence has triggered a major political storm as the main accused Ashish Mishra, who has been named in police FIR, is the son of the minister of state for home Ajay Mishra Teni. The police have booked Ashish Mishra on multiple charges, including murder and criminal conspiracy. However, he has not been arrested yet.
As the opposition leaders are raising demands for the removal of Ajay Mishra, the minister of state on Wednesday met Union home minister Amit Shah in New Delhi. Ajay Mishra has been claiming that his son was not there in the car which ran over the protesters. He claimed the driver lost the balance after being attacked by stone pelters and then some protesters came under the car.

Later, his driver was lynched and the car was set on fire, the minister had claimed.

SKUAST Jammu conducts CET 2021 for admission to Under graduate courses

KKR has a perfect mix of young local talent & experienced...

PM to address rallies at Kharagpur in Paschim Medinipur district