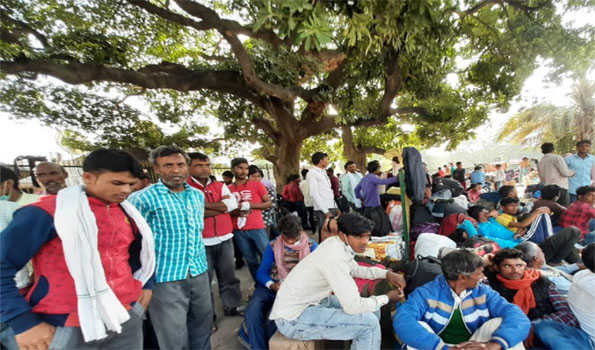 Jammu, Oct 20 : Desperate to exit the Kashmir Valley amid targeted killings of civilians, thousands of non-local workers along with their families continue to queue up outside ticket counters of railway stations and bus stops in Jammu on Wednesday. They appealed to Prime Minister Narendra Modi to help them reach their homes safely as quickly as possible.

Helpless and in distress, hundreds of non local labourers were seen arriving here on every form of transport, even on foot as they fled from the Valley trying to ensure a seat or even a foothold in any kind of transport exiting the union territory.

The workers have assembled at Jammu Tawi Railway Station and at General Bus Stand looking for cheaper transportation so that they reach their destinations in different parts of the country as soon as possible as they are running out of money.

So far in the month of October, 11 civilians including five non-local residents have been killed by the terrorists in Jammu and Kashmir.

“We are a poor class and had gone to Kashmir for earning a livelihood but instead of help, we are being killed in the Valley,” Budhiya Yadav, a resident of Madhya Pradesh said on reaching Jammu Tawi.

Claiming that he was also not paid pending dues by his contractor, Yadav said: “We want to appeal to Prime Minister Narendra Modi and Nitish Kumar (Bihar Chief Minister) to rescue us so that we safely reach our homes.”

Yadav said it “should be made clear to those part of the exodus, whether there would be any help extended by the union or any state government or should they accept it that they themselves will have to manage a rescue leaving everything at the mercy of God”.

“We want to reach our families. We are left with no money because all we had have been spent to reach Jammu,” Kumar said with moist eyes.

“There is heavy rush in trains; bookings are not available even in General Class and we are running out of money,” he said, appealing to the Prime Minister to help them reach their destinations by special trains.

The labourers also demanded food to be arranged as most have run out of money.

Jammu and Kashmir BJP president Ravinder Raina on Monday had appealed to non locals not to leave Kashmir and collectively fight against nefarious designs of Pakistan.

Raina in his message said Pakistan-sponsored terror outfits are frustrated because the army, police and paramilitary forces have tightened their noose and many of their top commanders are already neutralized.

“I want to appeal to all non-locals, not to flee or leave Kashmir, but let us collectively fight against them in the interest of the country,” said the BJP chief.

One of the non-local women from Chhattisgarh, who had reached Jammu from Srinagar told the media: “Kashmir is no longer ‘heaven’ but ‘hell’ for us. We are running for our lives and will never come back.”

Chamber of Commerce and Industries, Jammu on Tuesday said that the civilian killings will affect the industry in the Jammu region as tourists and devotees can change their plans to visit the UT in the ensuing winter months.

CCI Jammu President Arun Gupta while interacting with National Organising Secretary Bharat Vikas Parishad Suresh Jain here on Tuesday held a discussion on various issues related to the Jammu region and the current situation in Kashmir, including the targeted killings and subsequent exodus.

Gupta condemned the killings of innocent people in the Kashmir Valley.

He said that such incidents act as bottlenecks in the way of speeding up economic activities in the UT and frighten the people especially those communities which are being targeted.

He appealed to the Lt. Governor to take cognizance of the worsening situation in the valley and take proactive and persuasive steps to stop such types of incidents so that the people feel secure.

On Monday, the Bharatiya Janata Yuva Morcha and All Jammu and Kashmir Panchayat Conference (AJKPC), a frontline organisation of elected PRI members also staged demonstrations raising slogans against Pakistan and blaming them for brutal targeted killings.

The protestors also raised slogans against Pakistan and said that the neighbouring country had been fomenting trouble in Jammu and Kashmir by creating fear psychosis among the minorities living in Kashmir Valley through proxy war.

USD, Yen down; Pound, Euro up