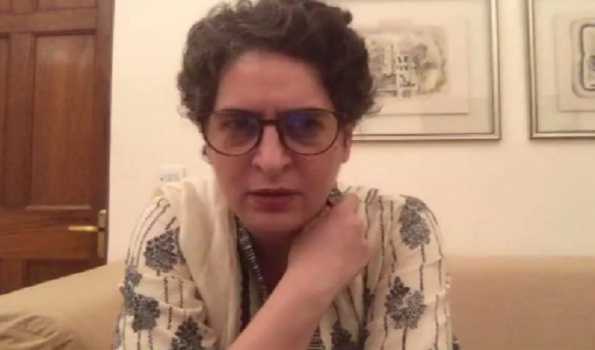 New Delhi, Sep 30 (UNI) Reacting to the midnight cremation of the Hathras gangrape victim by the Uttar Pradesh police allegedly without the consent of the girl’s family, Congress General secretary Priyanka Gandhi Vadra on Wednesday demanded the resignation of UP Chief Minister Yogi Adityanath for denying justice to the victim.

In a post on the social media, Priyanka Gandhi Vadra said that instead of protecting the victim and her family, the Yogi Adityanath government became complicit in depriving her of every single human right, even in death.

‘I was on the phone with the Hathras victim’s father when he was informed that his daughter had passed away. I heard him cry out in despair. He had just been telling me that all he wanted was justice for his child.”

“Last night he was robbed of the chance to take his daughter home for the last time and perform her last rites.@myogiadityanath RESIGN. Instead of protecting the victim and her family, your government became complicit in depriving her of every single human right, even in death. You have no moral right to continue as Chief Minister,’ Priyanka said.

The woman, who died on Tuesday in Safdurjung hospital in Delhi two weeks after she was gang-raped and tortured in Uttar Pradesh’s Hathras, was cremated by policemen on Tuesday night, allegedly without the consent of her family.

The woman died in Delhi’s Safdarjung Hospital on Tuesday morning after suffering multiple fractures in the sexual assault on her.

Reacting to the development, Congress leader Rahul Gandhi said, ‘a daughter if India is raped and murdered. Evidence is buried. And at the end, his family is denied the right of even performing her last rites. This is insulting and unjustified”.

Schools/Colleges in Puducherry to reopen on Sept 1: CM